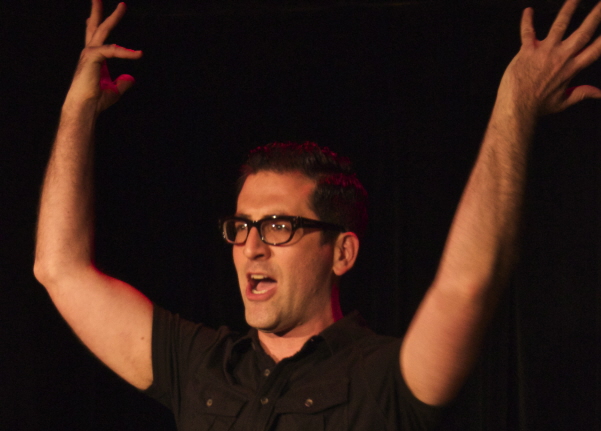 Director Ben Rimalower is making a second career of turning life’s lemons into the lemonade of serio-comic one man shows, which he performs rather than directs (Aaron Mark directs Rimalower, and you have to give Mark credit for having the requisite boldness to direct a director). First there was Patti Issues, which detailed his complex relationships with both his heroine Patti LuPone and his own father. Now, in Bad with Money, he goes into his even more complex relationship with cash and credit.

While Rimalower again brings wit and humor to the story – especially jokes and references designed to tickle theatre fanatics and insiders – the tone here is a bit more shaded and muted. He’s come to some kind of resolution in his relationship with Patti and Daddy; not so much with his addictive desire for the more, more, more than money can buy.

As such, Bad with Money isn’t as quite as breathlessly entertaining as Patti Issues. Neither does it have any particularly deep insights into the consumer culture that so grips Rimalower. This isn’t a huge problem, and in a way makes for a more truthfully ambivalent story. While his stories about going into prostitution are salacious and mostly fun, the stories about charging a boss’s account and dipping into a show’s budget are more dark and poignant.

It’s a complex story, involving lots of travel around the country, a large cast (though Rimalower only acts out a handful of the people he mentions), name changes and the difficult ebb and flow of a life in the theatre. It testifies to Rimalower’s skill as both writer and performer that very nearly every moment is crystal clear. Recommended.