This deserves the widest audience possible! It’s both one of the most important and funniest shows I’ve seen in quite some time, and this is in a year that also included the especially pungent and humane The Humans. Named after the final words of civil rights leader Medgar Evers, Turn Me Loose is sharply focused on one of the sharpest wits and minds of the past hundred years, African-American comedian and activist Dick Gregory, played with equal parts panache and passion by Joe Morton.

One of the greatest talkers of his time, Gregory provides playwright Gretchen Law with abundant material, from both his stand up and his numerous speeches and interviews on behalf of the civil rights movement. She has successfully distilled it all down to only the funniest, pithiest and most visionary bits.

John Carlin plays a number of smaller roles ranging from hecklers to interviewers, starting out the show as a white comic opening for Gregory in the early 1960s, a very Borscht Belt “Take-my-wife-please” type. Law is very clever in having this brief “warm-up” act, to show what a marked contrast Gregory was to what came before him.

Turn Me Loose zig zags back and forth in time, mostly between the present (Gregory is still very much alive) and the height of his activist days, the 1960s. His work with the civil rights movement became so intense that one bit extracted from a 1968 stand up find him at a loss to find anything funny to say. Clearly he recovered, since the more contemporary material finds him in fine fettle, furious but still ferociously funny.

Gregory went on to become a bit of a conspiracy theorist, and Turn Me Loose largely skirts that side of him. The exception comes in those theories which time has proven to be true, such as the conspiracy to concentrate wealth in fewer and fewer hands, and the conspiracy of companies like Monsanto to always pursue profit over their customers’ health. This is truly essential viewing, and as such gets my highest recommendation. 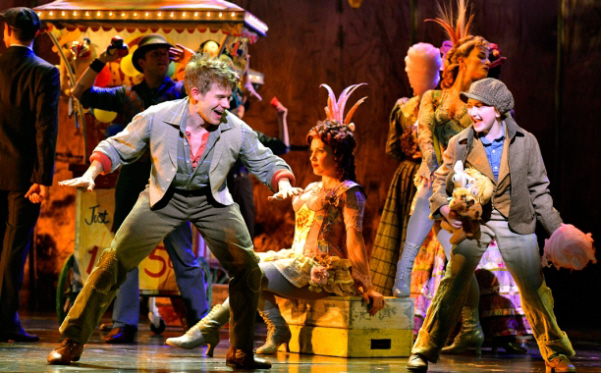 A charming and thoughtful (if finally slight) musical, Tuck Everlasting asks the question if you could live forever, would you? While it doesn’t really take that question head on, it uses it to gently explore questions about family, love and many other things. Set in the 1890s in small-town New Hampshire, the musical follows 11-year-old Winnie Foster as she runs away and meets the immortal Tuck family, who are very intent on keeping the key to their immortality secret.

The choreography by director/choreographer Casey Nicholaw (best known for Something Rotten!, Aladdin and The Book of Mormon) is the best thing about the show, especially in gaudy production numbers set in a traveling carnival, and a moving extended sequence tracing Winnie’s life after meeting the Tucks. His skill at dramaturgically shaping a piece is also evident in the crisp clarity of the storytelling and the musical’s jaunty pacing.

Nicholaw’s dance steps are a creative balletic reinterpretation of absolutely true-to-period folk-dancing. Composer Chris Miller’s score is a exact parallel to that: 19th Century Amercian folk music, filtered through a poppy Broadway sensibility. The level of craft isn’t quite up to Nicholaw’s: while the emotional tone is generally right, and the music is certainly pleasant, it doesn’t rise to the memorable. Nathan Tysen’s lyrics are quite strong, truly the place where the themes of the show are most penetratingly investigated.

Over all, the score is a little syrupy for my taste; as folksy musicals go, I prefer the coolly astringent intelligence Steve Martin brought to this season’s Bright Star. Speaking of that show, this has been a season full of folksiness: these two shows and to a lesser degree the country-tinged Waitress. Tuck Everlasting is just well-made enough to hold its head up in that company – Claudia Shear and Tim Federle’s book for Tuck is considerably stronger than Bright Star‘s, for example – but is that enough in this crowded field? In any event, Tuck Everlasting is engaging and very sweet, and I can easily recommend it.

Jesse Tyler Ferguson has always balanced sweet likability with just a dash of acidic bite, and both qualities serve him well in Fully Committed. He brings a lot of warmth when he plays the central character Sam, a reservationist at one of New York’s trendiest restaurants. He also plays all of the people calling the restaurant – more than 40 in all – and has plenty of opportunity to display that comedic acidity playing the more venomous callers. That sweetness and acidity come together deliciously when Sam slyly gets back at some of his oppressors.

Ferguson isn’t afraid to go over the top when the character calls for it, and throws himself into the whole affair with great energy and elan, but every moment stays rooted in reality. Director Jason Moore must surely take some credit for that as well – both the dynamism and rootedness.

Playwright Becky Mode has aimed at creating a generally light hearted satire, and has successful hit that target. Though the play premiered in 1999, Mode has updated it to be thoroughly in line with today’s culinary trends and pop culture. There are hints at more emotional depth when dealing with Sam’s recently widowed father, but it never gets so heavy that it bogs down what is clearly Fully Committed‘s main ambition: pure entertainment. High art this ain’t, but that doesn’t really matter. Recommended.

Cabaret legend Marilyn Maye has a golden voice, that of someone 40 years her junior (she’s 88!). She has jazz phrasing with the sort of effortlessness, elegance and ease that has nearly passed out of existence. She’s worthy of being included in the company of Ella Fitzgerald, Sarah Vaughn or Blossom Dearie, and she’s probably the finest performer in that classic jazz-pop style still with us. Ella Fitzgerald in fact called her “the greatest white female singer in the world”. I’ve been a hopeless fan of Maye’s for 7 years now (a mere fraction of her long career), and I can tell you that Ella wasn’t exaggerating!

On top of all that, her ability to apply her own personality to the lyrics of a given song is nonpareil – she gives lessons on it in the master classes she teaches. I can think of no other singer who possesses Maye’s combination of detailed interpretation, rhythmic verve, and, yes, vocal range.

Her new show at Feinstein’s / 54 Below, titled “Highlights”, is her most autobiographical yet, and finds her going over songs that have mattered in many phases of her career, from her local radio star childhood in the 1930s and 1940s, to her pop chart successes of the 1950s in 1960s, to her successful entry in regional theatre in the 1970s. It includes songs she still sings often, like “Step to the Rear”, “Make Your Own Kind of Music” and “I’m Still Here”, as well as surprises like a jazzy “Cheatin’ Heart” and an obscenely bluesy “Honeysuckle Rose”.

Maye appeared on Johnny Carson’s edition of “The Tonight Show” a total of 76 times, a record not likely ever to be beaten by any other singer with any other host. She oddly didn’t even mention Carson in this act, maybe because she’s done a whole separate show exclusively about Carson. In any event, if you love classic songs sung like they’re meant to be sung, it just doesn’t get any better than this. 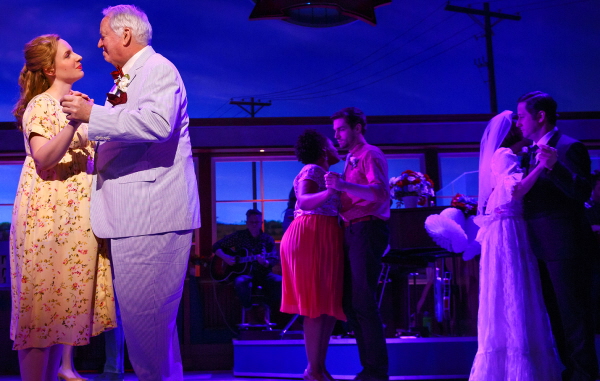 Pop-rock singer-songwriter Sara Bareilles has succeeded where several of her Billboard chart colleagues have failed – she has written the score for a musical that is not only catchy and tuneful, but also serves the storytelling in a coherent and cogent way. Waitress tells the story of Jenna (the ever-luminous Jessie Mueller), a waitress and expert pie maker in a small southern town, who married far too young to a man she doesn’t love. Can she escape him, and if so, how?

Both the character of Jenna and Bareilles’s rich and zesty songs are terrific vehicles for Mueller’s detailed, heart-felt acting and liquid gold voice. Her Jenna feels incredibly approachable – she feels like an earth mother in spite of the many things holding her down. And there are few Broadway stars who can match the depth of feeling she brings to her singing.

The generous spirit of Waitress allows for more than one terrific performance, and the show’s other marvel is Christopher Fitzgerald as Ogie, a highly eccentric chap in love with one of Jenna’s fellow waitresses. His big number “Never Getting Rid of Me” is utterly amazing – he communicates his character’s awkwardness and quirkiness with dancing, singing and acting that has to be called virtuoso. Stunning.

Jessie Nelson’s book goes bright and big, which is what’s called for in telling this largely joyous story. Even though director Diane Paulus – who usually favors heightened theatricality – delivers one of her most “realistic” productions to date, Waitress makes it clear that she is well aware of the realities of 2016 Broadway, where boldness is rewarded. All in all, one of the most engaging and fun musicals of the season. Recommended.