This musical revival charms from the word “go.” Finian’s Rainbow follows the charismatic Irish dreamer of the title (played with genuine magic by Jim Norton) and his fiery daughter Sharon (Kate Baldwin) through a fanciful version of the American south, where they go up against an intolerant Senator, a credit crisis, a wronged leprechaun, and, of course, a complicated love affair.

This is assuredly the best-sung Finian’s Rainbow that ever was. There’s no arguing with Cheyenne Jackson’s glittering delivery of “Old Devil Moon” (there’s a too-easy dirty joke in hunky Cheyenne playing a character named Woody, but I’ll leave it be). I’ve never heard a more luscious “How are Things in Glocca Morra” than the one Baldwin gives us. “Necessity” was never more passionate and moving than when sung by Terri White, and Chuck Cooper rattles the rafters in “The Begat” (I’d bet anything they turned his mic off more than once, he sings so strongly).

Director/choreographer Warren Carlyle has in general done a solid job of keeping what could have been hopelessly dated fresh and brisk. In his very briskness, though, he’s tended to gloss over some key things. The actual moment that Sharon and Woody fall in love, well, it just didn’t seem to happen. Boom, they’re in love — which could have been magic, too, but wasn’t. Also, lyricist Yip Harburg wrote some of the funniest, jokiest lyrics in musical comedy

, but as often as not the cast zoom right by the jokes.

It’s clear that choreography is Carlyle’s great strength — when this Finian dances, it soars. If only the book scenes were as agile. These are quibbles, though, with a show that’s more often than not a genuine pleasure and delight. 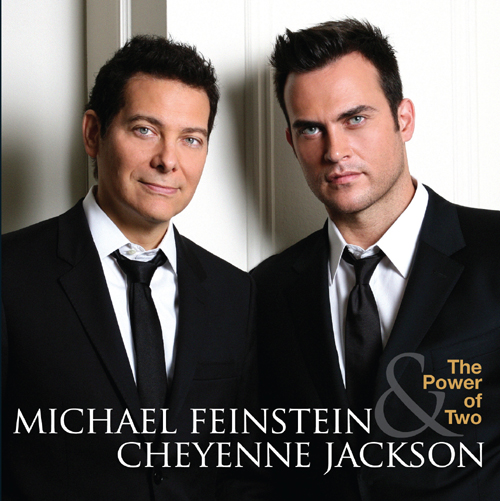 The new duet CD by classic crooner Michael Feinstein and bodacious Broadway boy Cheyenne Jackson, “The Power Of Two,” opens with our two handsome, out fellas gushing over each other to the tune of Cy Coleman’s “I’m Nothing Without You.” They follow that up with “Me and My Shadow” made famous as a duet between Frank Sinatra and Sammy Davis, Jr.

Despite how little they physically resemble Frank and Sammy, the comparison is oddly apt. Feinstein is, and Sinatra was, his time’s greatest popularizer of the Great American Songbook. Jackson is, and Davis was, one of the great musical theatre showmen of his day as well as arguably one of the best vocalists. So, yes, like Sinatra and Davis, but oh, so much gayer.

Feinstein wrings every note out of “I’m Gonna Sit Right Down and Write Myself a Letter” and Jackson rattles the rafters with an open-throated “Don’t Get around Much Anymore.” But just as often they turn in all seriousness to gay subject matter. Michael solos on “The Time Has Come,” a moving ballad written by a gay songwriter in the aftermath of Stonewall. And later they have a gorgeously restrained romantic duet on “We Kiss in a Shadow.”