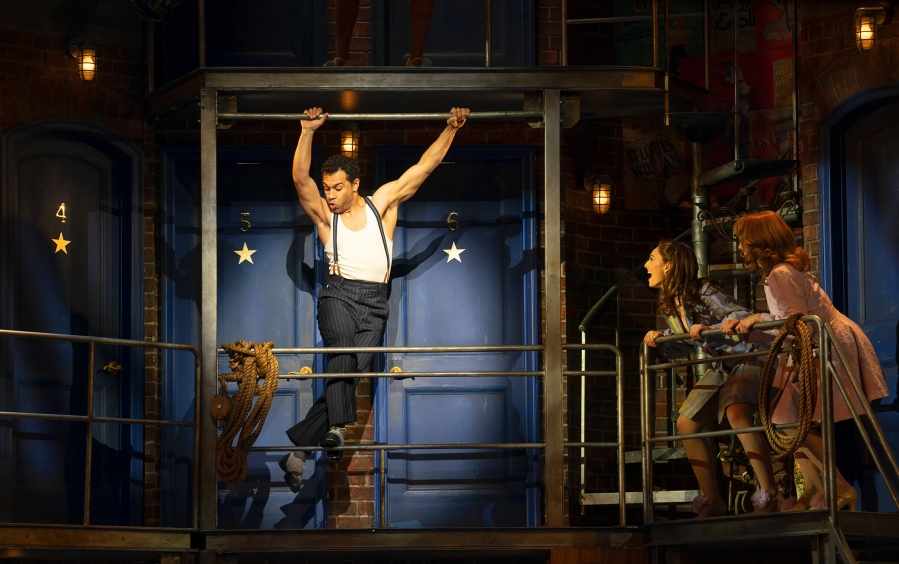 It’s hard to go wrong with an evening of Cole Porter sung well, whatever shape that takes. If that shape happens to be a sparkling revival of what is arguably his best score, Kiss Me, Kate, all the better. Roundabout Theatre’s new Broadway revival is just such a creature, a fine example of the delicious pleasures that traditional musical comedy can offer.

Kiss Me, Kate follows exes Fred Graham (Will Chase) and Lilli Vanessi (Kelly O’Hara) during out of town tryouts for a musical version of Shakespeare’s The Taming of The Shrew that Fred has devised as a vehicle for them. They spar onstage and off, reflecting the fractious relationship of the characters they play in the Shakespeare.

The biggest pleasure here, unsurpisingly, is O’Hara’s gorgeous renditions of Porter songs. Her “So In Love” nears being a definitive version, but her “I Hate Men” is a revelation for other reasons: she’s not in a rage, but instead calmly laying out why men are awful. That’s part and parcel of a general reimaging of the show to empower Lilli, which also involves some tweaks to book and lyrics by the brilliant Amanda Green.

Another standout is Warren Carlyle’s choreography, some of the best I’ve evver seen from him. In “Bianca” he has Corbin Bleu althletically tapping up and down steep sets of stairs. A truly stunning “Too Darn Hot” has flashes of Fosse and “eccentric dancing” woven into a dazzling tapestry of dance that is Carlyle’s own. Highly recommended.

Drag as a feminist act – that’s what Drag Race alum Miz Cracker is aiming at in her new cabaret show at the Laurie Beechman Theatre, “American Woman.” After appearing on the aforementioned reality show, Cracker noticed that her audience had shifted from mostly gay men to mostly women. This gave “her” pause – it makes sense to make jokes about gay sex if you’re speaking to gay men, but should you still be doing the same kind of act if your audience is women by more than half?

Cracker is “sorry / not sorry” for giving you a feminist TED talk with jokes, pop songs and choreography. Oh, and while we are on the subject, Le Miz gives you all of those New York drag traditions we love – Lypsinka-inspired lip-synch collage, cartwheels worthy of Candis Cayne (who was just at the Beechman last week), and even House of Ninja vogue moves – in ample supply. The “not sorry” comes with thought that “wouldn’t you have enjoyed algebra more if ‘teach’ threw in some costume changes?”

It’s not that drag queens can no longer do “funny pussy songs,” Cracker suggests, but they should maybe think a second about what it means to a woman to celebrate her pussy – and then does just such a number to illustrate what she has in mind. And so on through more and more serious feminist themes.

I saw her first performance of this show ever, and it still had some wrinkles. There’s an opening collage of beautiful powerful women of all types (wittily set to Smetana’s “My Fatherland”), but it’s overlong and doesn’t quite make sense, due to the fact we haven’t been clued into the feminist bent of the show yet. It would be more moving post-show, where it would make an effective crossover while Cracker changes outfits for the meet and greet. Plus, there are many repetitions that could easily be trimmed.

All in all, though, a remarkably intelligent and entertaining evening of drag. Recommended.

This diva’s big, expressive voice is one of Broadway’s most under-utilized treasures, and her new cabaret act “For The First Time” puts it on impressive display. She’s long been one of New York’s most beloved cabaret artists, but she’s been away for more than a year, touring North America in a first-class tour of Andrew Lloyd Webber’s Love Never Dies, playing – as she puts it – “the up for anything, party-loving Madame Giry.”

The new act marks her return to NYC, and pays tribute to “firsts” throughout Mason’s career. Above all it celebrates the songwriters she feels honored to have known personally. Some of these songs were written for her, some she was the person who sang the first demos. And some she includes just because she likes them. The “first” that truly unites all the songs in the show, however, is the fact that Mason has never sung any of them on a cabaret stage before.

Mason is a songwriter’s favorite, I think, because she generally sticks closer to the melody of songs than many contemporary Broadway performers. Its not because she’s trying to create any definitive version of these songs, but because she trusts the talent of the people she’s working with, and tells exactly the story the song sets out to tell.

Highlights include the little-known Barbra Streisand ballad “If I Close My Eyes,” by Billy Goldenberg and Alan and Marilyn Bergman; and two great comic numbers: Shelly Markham’s “Things I Learned Along the Way” (with specialty lyrics skewering the current occupant of the White House) and Sheldon Harnick’s priceless operetta pastiche “The Ballad of The Shape of Things” (hilariously detailing the geometry of a woman scorned). Recommended.

I’ve often referred to Judy Collins as a river of song – it just flows out of her in a gorgeous shimmering stream. Justin Vivian Bond is more like a tower of song – mysterious, imposing, beautiful, powerful and sometimes explosive. JVB’s current show “Under the Influence” is a tribute to Collins, part of Collins’ 2019 Vanguard Award and Residency at Joe’s Pub.

V considers Judy Collins to be v’s own spiritual baby sitter and music teacher. Collins significantly if indirectly educated Justin in music – all by the songs and songwriters Collins covered. So, with only a couple exceptions, Bond performs songs written by songwriters she discovered through Collins – but which Judy herself did not sing.

Bond’s taste in songs is impeccable, and v approaches them with the touch of a very careful curator. A curator, that is, who finds what is most explosive in the art they’re presenting, and then promptly detonates it. V turns David Crosby’s “Almost Cut My Hair” into something more rawly emotional, and fiercely sharpens the danger in Leonard Cohen’s “First We Take Manhattan” (in probably the best version of that song I’ve ever heard). V’s climactic rendition of Bob Dylan’s “All Along the Watchtower” truly burns down the house.

One of the best features of all of Bond’s shows is v’s acidly funny, stream of consciousness, between-song patter (which has had the downside of making certain shows marathon length, but not here). As always Bond is hilariously entertaining, wildly imaginative and vividly expressive. Highly recommended.

This transgender trailblazer – she was the first transgender actress playing a regular transgender character in television history – has also long been one of the most exciting performers on the drag scene. She’s probably one of the best dancers in the lip-synching world, so it’s altogether fitting that her show “Hi, Gorgeous!” has lots of fantastic lip-synching and dancing. She hits the stage like a fireball, doing not one but two high-energy Kay Thompson barnstormers (“Think Pink” and “Clap Yo’ Hands”), kicking so high that she almost kicks herself in the face.

The great pleasure for me, though, was discovering how much she’s polished her comedy. She always incorporated humor into her lip-synch, but her timing in her between-song storytelling has become something special. The show is a bit on the long side, but Candis is so engaging that you almost don’t want it to end.

While she is at heart a dancing showgirl, Candis shows some range in her song choices, from trip hop band Portishead’s “Give Me a Reason” (which was a great comfort to her when in the midst of her transition) to Heart’s “Alone” (in which she hilariously portrays a stalker). Cayne let us know she’s been out of it for a while, with sinus infections and neck injuries, but if she hadn’t mentioned it I wouldn’t have known; she always gives it her all. Highly recommended.

For more reviews and interviews by Jonathan Warman, see his blog Drama Queen.

Although it has a gorgeous score by Steven Sondheim – with some songs that are among his very best – Merrily We Roll Along is nobody’s best work. Nor, to be completely fair, is it anybody’s worst. And it has always been thus. The 1934 Kaufman & Hart play on which the musical is loosely based received good notices but was not a commercial success, in marked contrast to their collaborations before and afterwards. The major stumbling block is the way both play and musical are structured – telling the story of broken friendships backwards, each scene taking place a few years before the previous one.

The unfortunate result of this approach is we first see the characters as cynical and a little bit nasty, which makes it hard to identify with them. On the other hand, the payoff for this approach is that, generally the show gets progressively more optimistic as it continues. This makes a lot of intriguing thematic points, but all told makes for very unsatisfying storytelling. Merrily We Roll Along is a problematic puzzle of a show, which does manage to enlighten and often entertain, while intractably evading solution.

The current Off-Broadway revival by Fiasco Theater and Roundabout gives a very lean and clear-eyed account of this story, and does well with the music, especially considering that some of the cast are more actor-singers than singer-actors. Noah Brody’s direction leans into Merrily‘s most dynamic element, which definitely helps. Recommended.