This is a major play, no doubt about it, but what a lot of critics and commentators seem to have missed is what a deeply political play it is. It focuses on the Irish-American Blake family, who have come to youngest daughter Brigid’s (Sarah Steele) sketchy tenement Chinatown apartment (a “duplex” by virtue of extending into a basement) to celebrate Thanksgiving. All of them are dealing with serious problems of one sort or another, which they face with a mix of willful but warm good humor and stoic endurance. What struck me was the lack of any social safety net to help them with their problems.

Even the arguably most affluent family member, lawyer sister Aimee (Cassie Beck), has no defense against being fired for not having enough billable hours, even though the reason was a debilitating illness. And working class father Erik (Reed Birney) and mother Deirdre (Jayne Houdyshell) from Scranton? Forget it, they just have to do whatever it takes to get by. This family could be poster children for the Sanders campaign.

What the critics didn’t miss – how could you – is that The Humans is a deeply humane and compassionate play, and, in spite of tackling difficult subjects, a sparklingly funny one. If society and government don’t have the backs of the Blake family, they certainly have each others’ – even in the most trying of circumstances, as the play’s last burst of dialogue suggests.

The cast is uniformly extraordinary, with my personal favorite being the always sparkling Houdyshell. Director Joe Mantello delineates ever turn of this intricate play, never missing a detail or a nuance. Highly recommended.

Bravissima, Radvanovsky! This season Sondra Radvanovsky is proving her bel canto mettle by playing a trio of Tudor queens with starring roles in three operas by Gaetano Donizetti. This month, she plays the lead role in Maria Stuarda, better known in the English-speaking world as Mary, Queen of Scots. It’s a wonderful vehicle for her enormous, soaring, shimmering, effortless coloratura; this surely puts her in opera’s very highest circle of stars.

The opera gives us a highly fictionalized version of the final days of Mary Stuart, held prisoner by her cousin, Queen Elizabeth I. It follows Friedrich Schiller’s play of the same name in inventing a meeting between the two that never happened. Also, much is made of a supposed love between Elizabeth’s favorite courtier Robert Dudley of Leicester and Mary, when historically Leicester strongly resisted Elizabeth’s suggestion that he marry Mary to smooth things over politically.

Elza van den Heever’s performance as “Elizabetta” is vocally strong – she attacks the role with a brilliantine ferocity. Her physicalization also suggests a powerful and fierce woman, but with an odd twist. This Elizabetta struts and swaggers like a cowboy. It’s a strong choice, but also undeniably a strange one. As Maria, Radvanovsky is decidedly not a victim, defiant until the last possible moment, and then a beacon of radiant acceptance once it is clear there is no escape.

Director David McVicar’s production is stately and a tad solemn, but never descends into sleepy stasis. John McFarlane’s sets and costumes capture Elizabethan grandeur, though I wish he used a wider and more varied palette than white, black and red. I can hardly wait to see the conclusion of the triad, Roberto Devereaux, in which Radvanovsky will take her own turn playing the great Elizabeth. Recommended. 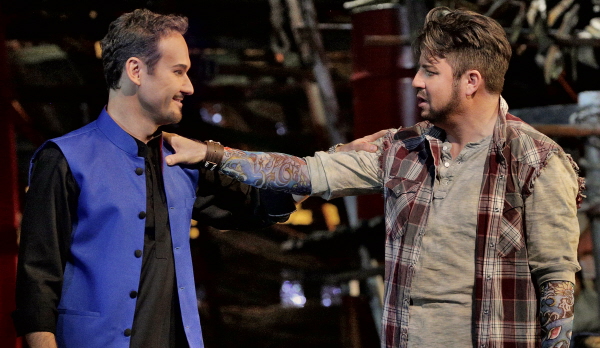 A rare Bizet at the Met! I’ve been immersing myself in obscure opera over the last couple of years, giving myself a crash education in forgotten corners of this gloriously gaudy art. Getting to know the French repertoire in detail has been one of this process’s greatest pleasures, and seeing a rarely performed Bizet work in its first Met production in over 100 years is icing on the cake.

Originally set in ancient Ceylon, Les Pêcheurs de Perles tells the story of Leïla, a beautiful Hindu priestess pursued by two close friends who become rivals for her love. The piece is for better or worse a big hunk of Orientalism. British director Penny Woolcock attempts to address that by setting the story in a poverty-ridden slum of today’s coastal Southeast Asia. I’m not sure that helps, particularly.

The Orientalism is, thank goodness, in the final analysis window dressing for a pretty straight ahead love triangle. This production was spurred by soprano Diana Damrau’s love of the role of Leïla, and indeed it fits her rich coloratura voice like a velvet glove. Mariusz Kwiecien here plays Zurga the more politically powerful of her suitors, with great dignity.

The other suitor, Nadir, is a dreamer, and Matthew Polenzani sings the role with a remarkable floating, billowy tenderness. I’d love to hear him do opera from the classical period, say Mozart or Gluck.

Projection design firm 59 Productions can do no wrong as far as I’m concerned. They set the highly-innovative gold standard for projections, and their work here is pretty powerful, finding new and exciting way to communicate the awesome and terrifying power of the ocean.

Conductor Gianandrea Noseda is a master of late Romantic color, and that mastery is on luscious display here. His account of the music is simultaneously grandiloquent and tight, giving in to Bizet’s surging beauty – it’s all very theatrical and lavish, as one always wants at the opera. Recommended.