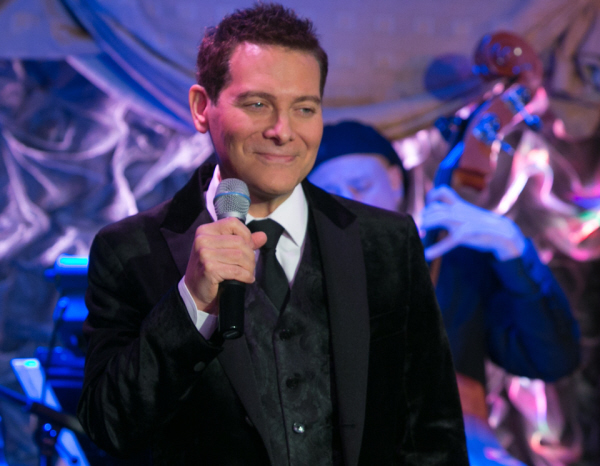 The foremost conservator and champion of the Great American Songbook, Michael Feinstein has made it a tradition to do a musically exciting Christmas show in New York City. For many years that was in the cabaret that bore his name at the Regency hotel. Last year and this year it’s at Birdland – and next year it will be at “Feinstein’s On Broadway” in the same building that houses Birdland.

Each year is somewhat different – this year is a swinging edition with a 17-piece big band, all slow burns and steady builds. One of the first Christmas shows I saw at Feinstein’s was Rosemary Clooney’s, in her later years a close friend to Michael. For this show, Feinstein movingly reprises two Irving Berlin songs from White Christmas, in which Clooney starred.

His reading of the song Clooney shared with Bing Crosby, “Count Your Blessings” is gentle and sweet. The uptempo “The Best Things Happen While You’re Dancing” gets a really expansive big band treatment. For years, Feinstein has also included non-holiday stardards in these seasonal sets, and this act climaxes with a big Sinatra medley, to kick off the celebration of Ol’ Blue Eyes’ centennial.

Where some of Feinstein’s previous Christmas shows had an unstoppable optimism just under the surface, this one has a more rueful undertow. Oh, it’s still a genuinely swinging good time, but any show that includes the melancholy “After the Holidays” is paying attention to the darker side of this time of year. Above all, however, this is simply a really engaging show that adds both heartfelt warmth and swinging fun to the holiday season. 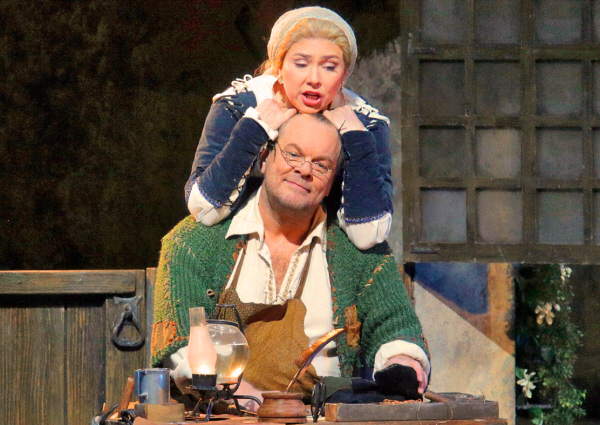 This was much more exciting than a six-hour opera by Wagner has any right to be. First of all, this marks the first time that I have heard James Levine, the Music Director of the Metropolitan Opera, at the baton. He lives up to his considerable reputation – this is conducting with the passion and agility of a Bernstein or a Bruno Walter, more than up to the formidable musical tasks Wagner sets.

Then there is the remarkable Michael Volle, the first operatic singer in some time who has instantaneously made me a fan. It’s not so much his voice, though his baritone is certainly a supple and rich instrument and he makes expert and expressive use of it. Rather, I am drawn to Volle because he is a consumate actor.

Volle plays the titular “master singer” Hans Sachs, a real-life 16th Century Nürnberg cobbler who became a truly major figure in German literary and musical history. In the wrong hands, Richard Wagner’s version of Sachs could come across as a jingoistic blow-hard – in other words, like Wagner himself. But when Volle plays the role, he gives us something more like my understanding of the historical Sachs: a deeply humane person, who filters the humanism then flowering all over Europe into something distinctly German.

Many great operatic perfomers would communicate something like that through the way they sing a role. With Volle, though, you can read all this in his face before he has sung a note. To me, this is what opera should be: great singing coupled with great acting, expressing more than either acting or singing alone could hope to do.

Director Otto Schenk’s production is profoundly traditional, and allows us to see both the benefits and drawbacks of such an approach. On the plus side, it gives us at least a whiff of what life in 16th Century Germany was actually like, and gives us room to imagine Sachs as a real person in a real place. On the down side, the staging can be awfully static, and as beautiful as the third act quintet “Selig, wie die Sonne” is, having it sung by five unmoving people against a brown backgroud nearly put me to sleep.

It may be daunting to sit through one of the longest pieces in the operatic repetoire. This lovely rendition, though, is more than worth it. 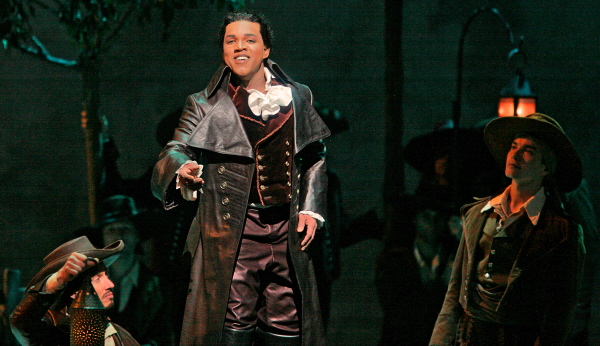 Early 19th Century Italian opera…just not my thing! I mean, this opera is probably the very best that time and place produced, and I admire its virtues and chuckle at its humor (more than I do for some other supposedly funny operas) – but still it leaves me wanting something more or something else.

Director Bartlett Sher’s low-key production didn’t help me much. Not that he did sub par work – he never does, I find his work admirable. And here, he served the opera fine, and added some welcome slapstick. He just didn’t elevate the material in a way that worked for me personally.

Il Barbiere does not lack for beautiful melodies, and in the current Met production they are indeed beautifully sung. Isabel Leonard plays the feisty Rosina, a lovely young woman who struggles against being kept under lock and key by her overprotective guardian. Her singing sparkles brightly and she brings terrific bite and knowingness to the role. In Rosina’s aria “Una voce poca fa” she warns that when crossed in love she “becomes a viper” – Leonard delivers that line with a wicked smile, which makes it all the more intimidating.

Lawrence Brownlee plays her suitor, Almaviva (a count in a series of serving-class disguises), with earnest energy. He executed the virtuosic runs that are the role’s hallmaks with great skill and panache. Christopher Maltman plays the titular barber, Figaro. The opera belongs more to Rosina and Almaviva than to Figaro, so any production needs a charasmatic singer with a golden voice in this role, if only to justify the title – Maltman more than fits the bill. He is indeed so slyly sexy that you wonder why Figaro has no major love interest in the piece.