Manhattan Theatre Club does very well with plays by Donald Margulies. His Sight Unseen was the first play to be an unqualified success in their Broadway theatre in 2004 (called the Biltmore at the time, now called the Friedman). His Brooklyn Boy received a similar reception the following season. Now, after a break of a few seasons, the Friedman will play host this spring to not one but two Margulies premieres, Time Stands Still and Collected Stories.

Time Stands Still also reunites Margulies with his leading lady from Sight Unseen, the luminous Laura Linney. Here Linney plays brilliant and acclaimed photojournalist Sarah, who has been seriously injured by a bomb while working in a war zone. Her journalist boyfriend James (Brian d’Arcy James, fresh from Shrek), is nursing her back to health, and is also nursing the notion of them leaving war coverage behind and settling down.

Margulies is best at portraying the subtle, quiet moments when people connect or ever so slightly miss connecting, and there’s plenty of that here. He’s also probing into the ethical and psychological baggage of relatively privileged people who make it their business to document the world’s worst miseries.

Sarah stands squarely at the crux of this probe, as the character most driven to cover the world, in spite of nearly losing her life in that pursuit. Linney is a marvel, investing Sarah with serious gravitas and deep emotions that percolate suddenly and unexpectedly to the surface. James definitely holds his own opposite Linney, making a very strong case for the simple, comfortable life.

Eric Bogosian and Alicia Silverstone make terrific appearances as Sarah’s editor and his new girlfriend, putting the central couple’s struggle in the context of the wider world. If I have one beef with Margulies, it would be the play’s lack of an explicit argument for the importance of the press. That said, the play’s powerful final moment makes a sudden, visceral impression that pulls the whole thing together in one potent image — arguably what Sarah’s been doing all along.

In aging matinee idol Garry Essendine, the central character in Present Laughter, playwright and gay sophisticate Noël Coward created one of the great comic monsters of the modern theater. All the greater because behind his arrogant, preening exterior, Garry is actually a truly compassionate, loving person, surprisingly devoted to the friends he so often bullies and insults. He just can’t help getting dazzled by his own brilliance (“I still maintain I should have been magnificent as Peer Gynt!”) — and who can’t identify with that?

It’s a truly delicious role, and Victor Garber seems to be having a wonderful time sinking his teeth into it. While other actors have had great success comically playing up Garry’s ego, Garber lets that take care of itself and takes Garry’s relationships with his tight-knit circle of friends totally to heart. This makes for what is easily the most textured Present Laughter I’ve ever seen. Even as you’re rolling your eyes at the excuses Garry makes for himself, you know he sincerely means well and is trying to get it right.

While Garry struggles to plan his upcoming tour of Africa, his elegant London flat is invaded by all manner of vivid characters. The flat itself is packed with character — Alexander Dodge’s set is a luscious Deco marvel. Lisa Banes is delectably dry as Garry’s estranged wife Liz, and Harriet Harris is her usual wickedly funny self as his indispensible secretary Monica.

Perhaps best of all is Brooks Ashmanskas as queer-in-every-sense playwright Roland Maule. Coward intended this character to seem like he’s truly touched; Ashmanskas is insanely over the top, truly from a different planet — or maybe just high camp heaven!

In Tyne Daly’s previous nightclub act at Feinstein’s, her cabaret debut, she couldn’t find a theme to connect the songs she wanted to sing, so she simply titled it “Songs.” This time, in a show called “The Second Time Around,” Daly has settled on the theme of the blessings and curses that the passage of time brings. It’s a more reflective show, with Tyne showing a more subtle side that’s equal parts expansive emotion and steely-eyed realism.

That’s not to say the stage and screen persona for which she’s known — a “broad” who’s so brassy that it’s dangerous (many have called her 1989 performance as Mama Rose in Gypsy “terrifying”) — doesn’t make an appearance. Her take on Bessie Smith’s murderous “Send Me to the `Lectric Chair” is satisfyingly intense, and she makes a very solid case that she should play Countess Aurelia, The Madwoman of Chaillot, in Jerry Herman’s Dear World (by way of a climactic medley from that show).

More typical of the tone of the show, however, is her wistful take on Bill Withers’s “Ain’t No Sunshine.” Thoughtful and hushed, it’s a more textured approach than you might expect from Daly, although what she gains in nuance, she loses in magnetism. This way of working is a mixed blessing, intriguing but not what I would call compelling.

That said, there isn’t a moment that Daly doesn’t exude both a heartening confidence and a surprising vulnerability. It’s not a rousing evening, but it is in its own way quietly rewarding.

I remember seeing a production of Gilbert and Sullivan’s 1885 operetta The Mikado when I was a kid and thinking it was one of the most hilarious things I had ever seen. So, when I saw that, in this slow-as-usual January, the New York Gilbert and Sullivan Players would be presenting it, I jumped at the opportunity to see it again.

Even though it’s set in a Japanese village, The Mikado is about as jolly British as you can get — I was also curious to see if it was more racist than I remember. Hardly! It’s far too briskly silly and willfully inauthentic to be taken as saying anything about Japan or the Japanese. Casting a few more Asian actors who could use the work might have been nice (I counted one), but Japan is an almost arbitrary setting that mostly justifies colorful costumes (which costumer designers Gail J. Wofford and Kayko Nakamura delivered in spades).

In the village of Titipu, beautiful school girl Yum-Yum loves the romantic minstrel Nanki-Poo but is engaged to Ko-Ko the executioner (who has a list of potential victims but is too sensitive to actually perform his duties). This romantic triangle is further entangled by the arrival of the fearsome Katisha, claiming Nanki-Poo as her “perjured lover,” and later the emperor, or “Mikado,” himself.

This production hits the right tone of silly fun but doesn’t go far enough with it. To my taste, the more The Mikado is done with barely controlled insanity, the better it is. While a handful of performers approach this — particularly Louis Dall’Ava as the comically corrupt bureaucrat Pooh-Bah — in general the humor in this production is too tame by half. It’s often half-hearted, but at least that half is in the right place.

There is nothing half-hearted about the musical side of this Mikado, though, and the principal pleasure here is hearing the score, one of the most glittering in all of operetta, done with such passion and dedication. This Mikado will not likely create any new lovers of operetta, but should satisfy the already converted. 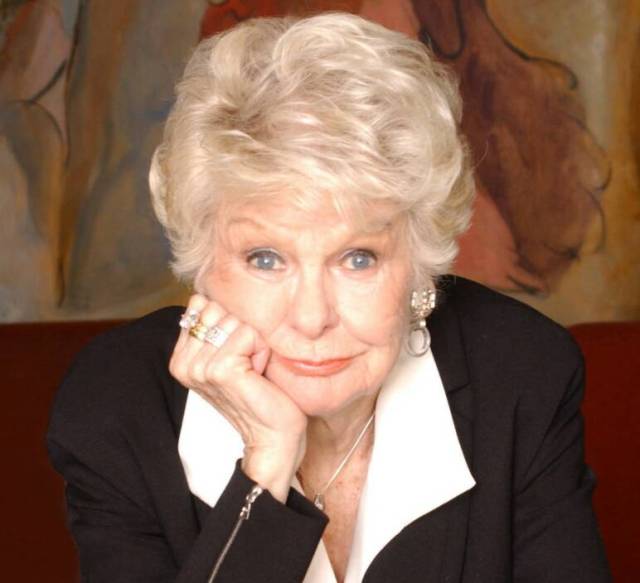 Broadway legend Elaine Stritch’s latest cabaret show Singin’ Sondheim…One Song at a Time (has anyone ever dared to do two at a time?) finds her doing her very favorite songs by her fellow Broadway legend Stephen Sondheim, including some written with such collaborators as Leonard Bernstein, Richard Rodgers and Jule Styne. With her longtime music director Rob Bowman leading a six-piece band, Elaine works overtime to entertain audiences with Stephen’s biggest showstoppers.

Stritch is most famous today for her wildly successful autobiographical 2002 theater piece Elaine Stritch at Liberty. In her late seventies at the time of At Liberty, her voice was ragged but she acted the hell out of any song that came her way. Soon to be 85, the voice is more ragged still, but the power of her acting has not diminished one whit. The second song is “Rose’s Turn” from Gypsy — let’s just take a moment to applaud the balls it takes do that epic as your second number! — and I have never seen a more frighteningly lucid Rose. This Rose knows she’s batshit crazy and doesn’t give a damn. Eek!

Stritch has a tender story to tell about the love of her life, John Bay, and his Sondheim-approved parody of “Send in the Clowns” as a Groucho Marx song. Turns out that she and John, Londoners at the time, had stayed at the Carlyle when they first came to see the show “Clowns” comes from, A Little Night Music. Today, she commutes to the show. an elevator ride down from her residence in the Carlyle Hotel, the very same room she shared with Bay.

She does some unusual takes on well-known songs: she delivers “Broadway Baby” as the wistful rumination of a Broadway star looking back on her gypsy days, and delivers the lyrics of “Every Day a Little Death” as a devastatingly effective monologue. Perhaps best of all is her ruefully tender encore of “The Best Thing That Ever Happened to Me” from Sondheim’s most recent, Road Show. By and large, though, this is Broadway comfort food (in a good way) as Stritch sells every clever Sondheim-ism to the back row. 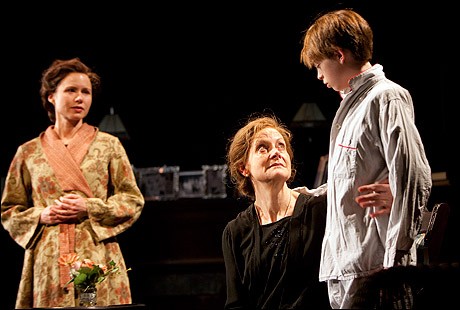 The late Horton Foote is known for his detailed, closely observed plays about lives in small-town Texas. That might sound dry and dreary, but his plays are anything but; Foote focuses on genuinely humane individuals trying to make worthwhile lives in the face of attacks from the many human monsters that the Lone Star State begets.

The Orphan’s Home Cycle follows one such honest soul, Horace Robedaux, from childhood through adulthood, over the course of nine one-acts spread out over three evenings. Part One takes us all the way back to 1902, showing an even more desolate and monstrously forbidding environment than Foote’s other plays.

There are not one but two onstage deaths from what we would recognize today as liver failure due to alcoholism. It’s a harrowing way to go, and director Michael Wilson has not flinched from portraying it honestly. The first such death is in Roots in a Parched Ground, in which Horace’s father Paul (played by Bill Heck, who plays Horace for the great majority of the cycle) lies in his deathbed, having taken to drink after his marriage fell apart.

Paul’s family is an educated, scholarly, citified bunch originally from Galveston, ill-suited for the hard realities of surviving in a small town. The impressionable young Horace goes from wanting to be a lawyer like his father to wanting to turn his back on his family and learn a trade.

He thinks he’s going to be helping run a store, but the second play finds him guarding the titular Convicts, and helping out the irascible plantation owner — and Confederate Civil War veteran — Soll Gautier (a towering performance by James DeMarse). Gautier suffers the second alcohol-induced death of the evening, but where the elder Robedaux went quietly, Gautier undergoes acute paranoia and hallucinations, which turn his inborn meanness into an unpredictable, grotesque horror. Fun stuff!

Lily Dale, the third play, finds Horace (now played by Heck) in 1910 Houston, visiting his mother (who more or less abandoned him when his father died). He tries to reach out to his sister Lily Dale (Jenny Dare Paulin), but is stymied at every turn by his stepfather Pete Davenport (a terrifying Devon Abner), an abusive man whose affection for Lily is more than a little creepy. The least effective piece of the three, it’s still an evocative slice of Texas as it moves into modernity (Davenport works for the railroad and Lily plays rags in addition to classical pieces on the piano).

The Orphan’s Home Cycle is classic Foote — I am excited about seeing parts Two and Three in the coming weeks.