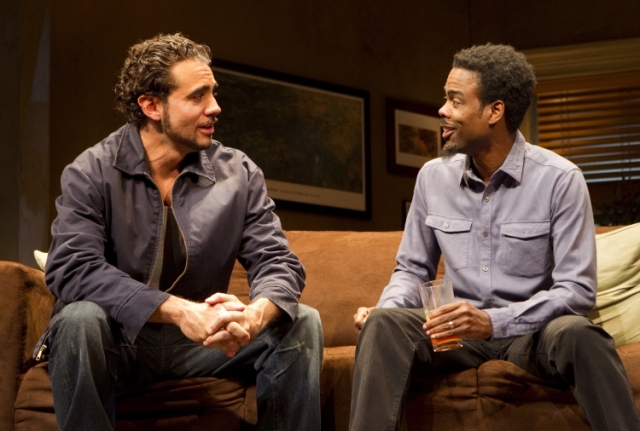 For about the first half-hour or so of The Motherfucker with the Hat I was thinking “I’ll be damned if this Stephen Adly Guirgis hasn’t found a way to make this foul-mouthed, straight-boy playwright idiom work as genuine article comedy.” Well, that turned out to be an overly optimistic assessment, but Guirgis certainly does more interesting things with this genre than, say, David Mamet, making Motherfucker a slightly above average comic melodrama, and one helluva star vehicle for Bobby Cannavale.

Cannavale plays parolee and recovering alcoholic Jackie, who’s in a fiery relationship with still-using coke-head Veronica (Annabella Sciorra), with whom he’s been in love since the 8th grade. After seeing the titular hat on Veronica’s table, he goes crazy with jealousy, from which his AA sponsor, Ralph D (Chris Rock) talks him down. That’s the story of that promising first half-hour. Things unravel from there, sometimes compellingly, more often tiresomely.

In the character of Jackie, however, Guirgis has created an involving role that offers abundant pyrotechnic possibilities for the right actor, as Jackie undergoes a complex and unpredictable evolution from loose cannon to the play’s moral center. Cannavale knows what acting gold he’s got his hands on, and plays it for all its worth. I don’t know if he has the Tony in the bag with this one, but if he doesn’t get a nom it’ll be a crime.

Chris Rock, from a publicity angle the star of the show, in fact obviously knows that he’s in a supporting role, and he provides a magnificent foil for Cannavale. The rest of the cast deliver sharp performances under director Anna Shapiro’s well-calibrated tutelage (although all of them could use a refresher course in the Acting 101 idea of “holding for laughs”). Not as good as it seems to be at first, but certainly not a waste of time, and seeing Cannavale’s performance is almost worth Broadway ticket prices.