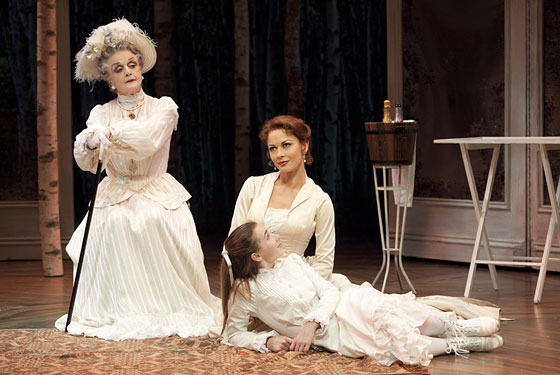 This musical, set in the very earliest years of the 20th century Sweden, is as optimistically romantic as Stephen Sondheim ever got. Even here there are generous helpings of his wry cynicism, but never enough to truly darken the sweetly swooning mood. Based on Ingmar Bergman’s film Smiles of a Summer Night, A Little Night Music the story follows lawyer Fredrik Egerman (Alexander Hanson) and his renewed entanglement with glamorous actress Desirée Armfeldt (Catherine Zeta-Jones) after many years apart.

Director Trevor Nunn has taken Sondheim and book writer Hugh Wheeler at their words, going directly for the sharp humor and heartache that are right there on the surface. As usual for him, he catches the majority of the verbal cues, but misses some of the musical ones; for example, there is a choral quartet of singers that are never visually established as a quartet, instead muddily mixing in with the rest of the ensemble. That said, he has given Night Music a warmly emotional reading that I found seductive.

Hanson is suitably worldly and bighearted as Fredrik, and Zeta-Jones (in her much-touted Broadway debut) gives us an appropriately larger-than-life Desirée. Angela Lansbury is superbly cast as Madame Armfeldt, Desirée’s former courtesan of a mother; it’s beyond delightful to see her at work in a musical, in a role that gives full reign to her intelligence and droll wit.

I also particularly enjoyed Erin Davie as the tart-tongued Countess Charlotte. She played young Little Edie in Grey Gardens — it’s great to have her back on the stage of the Walter Kerr Theatre playing another hilarious, high-strung eccentric. Night Music is probably the Sondheim show I like the most throughout, and it’s a real pleasure to see this solid and good-humored production on Broadway.