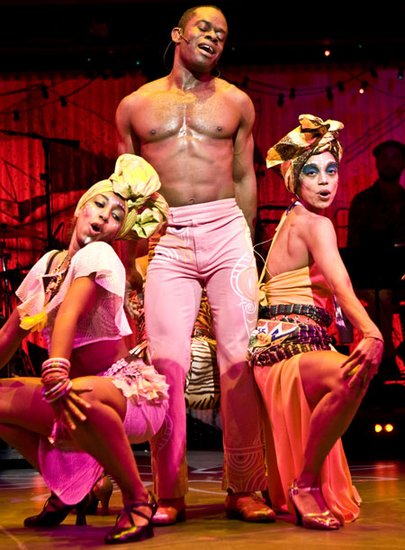 Fela! dances, shimmies, shakes, pulses, thrusts and explodes in a way never seen on Broadway before. About Afrobeat legend Fela Anikulapo-Kuti and his tumultuous life as political activist and innovative musician, this “musical” is less a book musical and more of a wholesale reconstruction of a unique place and time.

Director/choreographer Bill T. Jones takes us to Fela’s nightclub, “The Shrine” in Lagos, Nigeria, on a hot summer night in 1978. And he really takes us there — set designer Marina Dragihci has covered every available inch of the Eugene O’Neill Theatre with colorful, funky, Afro-centric decoration. The very hottest of today’s Afrobeat bands, Antibalas, is jamming the entire time the audience is entering. Throughout the evening, the imagery never stops, and neither does the groove.

Actually, we get “The Shrine Plus”: surely Fela’s club never featured lights as dynamic as those designed by Robert Wierzel, or projections as powerful as Peter Nigrini’s. Plus, Jones has Fela telling big chunks of his life story in a more or less chronological fashion, which would have never happened at a real evening in the Shrine, which were very spontaneous and pot-fueled.

That said, the evening actually isn’t structured enough — the attempt to catch the wild atmosphere of the Shrine means that somewhere in Act II our interest slacks, in spite of a tremendous 11 o’clock appearance of the incomparable Lillias White as the deified spirit of Fela’s mother Funmilayo.

Also, this is decidedly “Fela’s Fela,” Anikulapo-Kuti presented as he himself would have wished, as a folk hero. A few important faults go unreported: Fela’s attitude towards his 27 wives, and women in general, veered wildly between worshipfulness and genuinely shocking sexism. We are only shown the worshipful side.

Further, he wrote songs against condom use and portrayed AIDS as a “white man’s disease” — while in a deeply ironic turn, he died of the disease himself in 1997 (it bears saying that his family has been deeply involved with AIDS advocacy ever since). AIDS is not even mentioned in the show, save for a slogan on a coffin at show’s end. Given that Jones did a groundbreaking dance about AIDS in 1994 called Still/Here, this omission is odder still.

Still, Fela! is an energetic, exciting part of an ongoing infusion of new ideas and approaches into the Broadway musical. For that alone, it is well worth seeing.