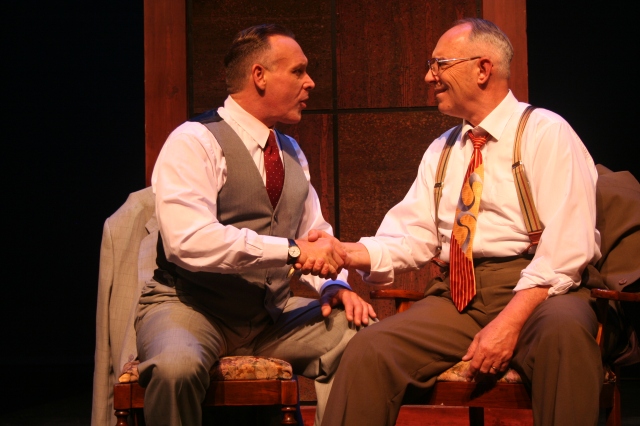 For anybody who knows anything at all about twelve step programs, “Bill W and Dr. Bob” will feel like a prequel. “Oh, that’s where ‘one day at a time’ comes from,” you’ll think, or “boy their wives talking sure reminds me of Al-Anon.” It’s no surprise that the first line of the play “Hi, my name is Bill and I’m an alcoholic,” gets a rousing “Hi, Bill” from the audience.

It’s a new play about Bill Wilson, a failed stockbroker, and Dr. Bob Smith, a surgeon, two “hopeless drunks” (their own words) whose sometimes stormy friendship, driven by a common desire for relief from their chronic and crippling alcoholism, led to the founding of Alcoholics Anonymous in 1935.  “Bill W. and Dr. Bob” is also quite worthwhile simply as a period piece that successfully evokes the feel of the ‘20s and ‘30s, while telling a gut-wrenchingly compelling story about two deeply flawed men who found the ability to shake their demons in each other.