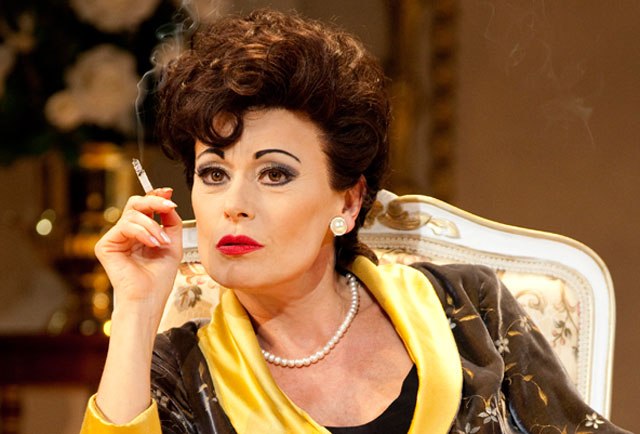 Another show about the declining years of Judy Garland? I’m sorry, that response may be just me. It’s an occupational hazard of covering the New York theatre from a gay angle for as long as I have. Any time Judy pops up in a cabaret act or play I’m more or less obligated to cover it. I don’t want to give the impression that it’s a burden; even though I’m not the most committed fan, I do like Garland quite a lot.

But, for me, at this point, it has become valid to ask what new insight or angle any new “Judy” show has to offer. End of the Rainbow isn’t particularly insightful, but it does have a pretty good “reason to be” – a stunning, firecracker performance by Tracie Bennett. Her speaking voice sometimes wanders into territory that’s more Katherine Hepburn or Tallulah Bankhead, but when she does get Judy right, it’s positively eerie.

Its the singing where she really nails Garland; its only partly in the vocals, which emulate Judy’s singing style quite well, and only partly in the mannerisms, which are even closer. The magic of Bennett’s performance is in the way she truly captures the incandescent fire and drive behind the vocals and the gestures. Judy rarely gave less than 150%, and Bennett’s singing performances are just as committed and passionate.

We are catching Judy at the very end, December 1968, in the midst of yet another attempted comeback. When we aren’t at London’s Talk of the Town, we’re in a hotel room where she’s preparing for a series of concerts, with both her new young fiancé Mickey (Tom Pelphrey) and her gay accompanist Anthony (played with quiet dignity by Michael Cumpsty).

Peter Quilter’s script has all of the flaws typical of Judy bio-plays – most irritatingly some anti-gay remarks. It’s at least a plus that in End those remarks come from Mickey rather than Judy, and Quilter does have the savvy to have Anthony furiously respond to them. There’s nothing in the script – aside from a certain voyeuristic tension – that you couldn’t get just as well from any number of biographies. End of the Rainbow is nothing more or less than a moderately successful star vehicle – without Bennett blazing away at the center of it, it wouldn’t be nearly as good.