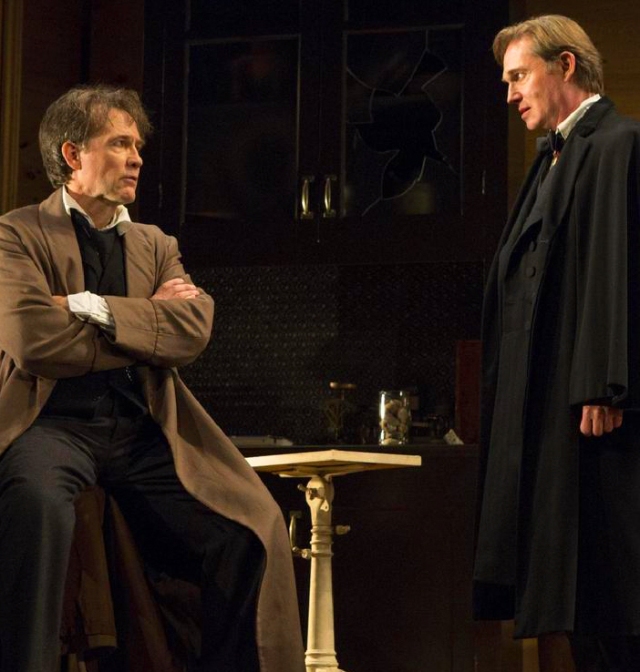 I read Henrik Ibsen’s An Enemy of the People for the first time a couple of years ago, and it immediately became my favorite Ibsen play. It moves at an exciting clip, and has many comic moments – unusual for the usually highly serious Norwegian playwright. Plus, while Ibsen was often ahead of his time, he was unusually prescient here, shedding an uncompromising light on the dangers of pollution and how money and mediocrity can rapidly corrupt a democracy – sound familiar?

Dr. Thomas Stockmann (played by four time-Tony-winner Boyd Gaines in a nomination-worthy performance) discovers high levels of toxins in the water used in his town’s widely-renowned spa. But since the baths are the town’s main source of revenue, the powers that be array themselves against him with terrifying rapidity.

The dialogue in Rebecca Lenkiewicz’s adaptation is particularly salty – though I wouldn’t be at all surprised if this is truer to Ibsen’s original, since sensibilities weren’t as uptight in 1882 Norway as they were in Victorian England. Certainly, she has more than successfully captured the sharp satirical spirit and almost delirious energy of the play. Stockmann is delighted one minute and devastated the next several times throughout the play. This tragicomedy turns on a dime and just keeps on turning; Lenkiewicz and Gaines both successfully delineate the good Doctor’s roller-coaster ride through controversy in an exciting, compelling way

Director Doug Hughes has turned up the volume on the passion of both the Doctor and the authorities opposing him; Richard Thomas is especially strong as Stockmann’s main opponent (his brother Peter, who also happens to be mayor). I really do love this play, which I can’t say for all of Ibsen, and I am really very satisfied with this production. Highly recommended!