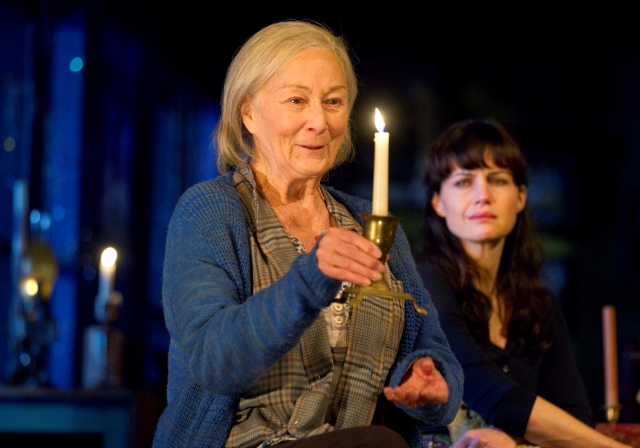 I’m not the biggest fan of South African playwright Athol Fugard, but this revival of his The Road to Mecca has raised my opinion of what he has to offer as a writer and a thinker. The things I don’t like about his other plays are still in evidence – it takes over a half hour for almost anything at all to happen, and once the play has reached its moving climax, we still have a half hour to go, much of it repetitive or unnecessary. That said, though, the second half of the first act and the first two-thirds of the second are indeed gripping, thoughtful drama.

Set in 1974 in the semi-desert region of South Africa known as the Karoo, The Road to Mecca follows elderly recluse Helen (Rosemary Harris), based on real-life “outsider” artist Helen Martin. Helen’s friend Elsa (Carla Gugino), a young teacher from Cape Town, visits her, concerned by a despondent letter Helen has sent. We discover (after that interminable half-hour) that Pastor Marius Byleveld (Jim Dale), who embodies the village’s conservative values, is determined to get Miss Helen into an old-age home.

Harris succeeds beautifully at conveying both Helen’s strong spirit and her ironically weak will. Gugino makes the best of the show’s least well-delineated character, laying the emphasis firmly on her compassion for Helen. And since we are inclined to hate the small-minded Marius before he even appears, its a testament to Dale’s phenomenal acting gifts that he actually seems to be a full, even somewhat warm human being.

Director Gordon Edelstein has a real gift for casting, and also keeps Fugard’s long exposition moving as briskly as possible, taking full advantage of those moments where we actually see the character’s personalities rather than hearing about them. Be patient with this show, and there are definitely rewards to be had.