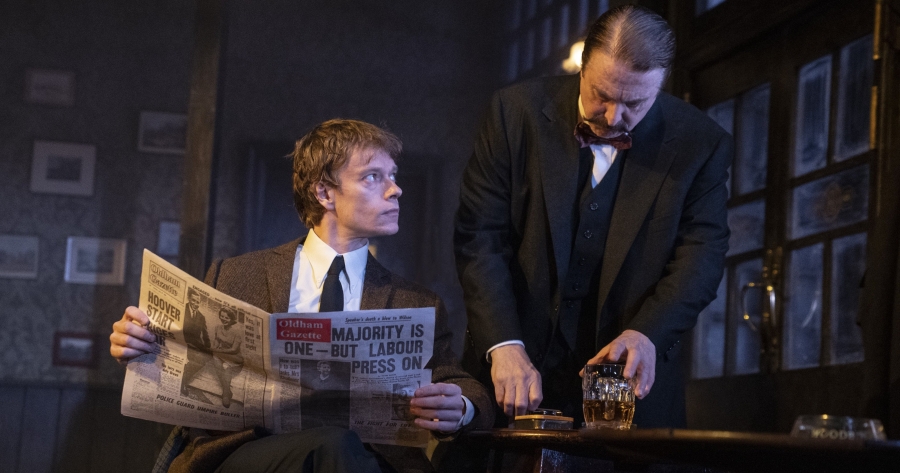 Strange. Macabre. Very funny. Martin McDonagh. These six words fit perfectly together, in the most natural way (or is it “unnatural”?). The playwright has made his career creating the very best dark comedies of the contemporary stage and screen. His newest play, Hangmen mostly happens in Lancashire in November 1965, just as capital punishment was being abolished in Britain, putting hangmen, whose numbers were already dwindling, completely out of work.

In the play, we follow fictional hangman Harry Wade (David Threlfall), a typical McDonagh comic bastard, who is in many ways awful (he killed people for a living, for goodness sake), but also has redeeming qualities. He now owns a pub, as did the historical “last hangman” Albert Pierrepoint, who has a presence is the play, and the mention of whose name makes Harry bristle.

Harry is joined behind the bar by his wife Alice (Tracie Bennett in full Brit broad mode) and his socially awkard daughter Shirley (Gaby French). Harry is the closest thing the small city of Oldham has to a celebrity, and local newspaper reporter Clegg (Owen Campbell) come’s to Harry’s pub to cover how this executioner feels about being abruptly retired. While initially refusing to talk, Harry eventually sings like a bird, trashing his nemesis Pierrepoint, who executed many more people than Harry, but those dead included Nazis and women, whom Harry chooses not to count. A menacing Londoner named Mooney (Alfie Allen) throws this day even more out of whack.

This being a McDonagh play this is only the first of many twists, mostly of the sinister variety. While he has made some terrific films, McDonagh is without a doubt a creature of the theatre, and I’m thrilled we have him back. Recommended.