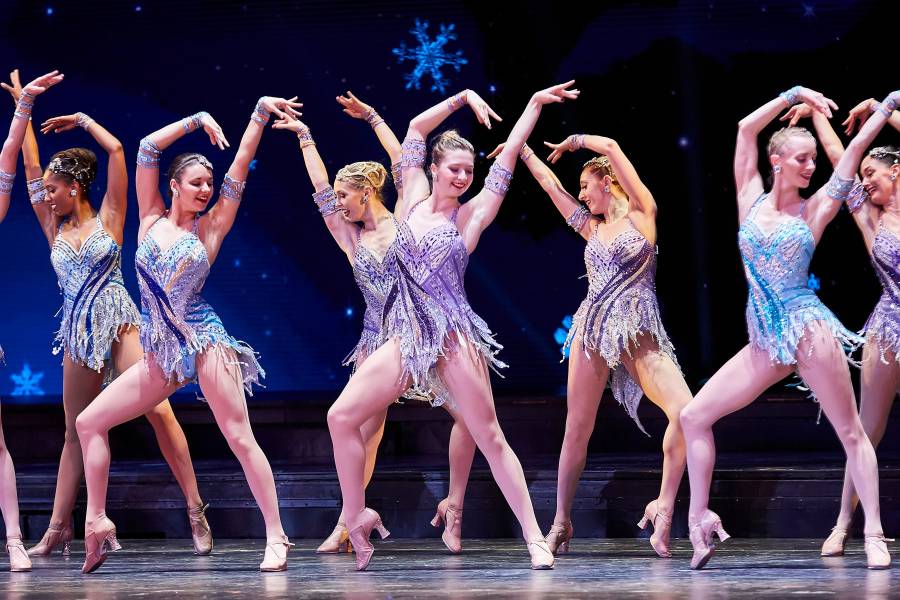 This show first and foremost earns the right to be called spectacular, driven by the amazing unison dancing of the Rockettes themselves, but hugely abetted by Radio City’s stunning hydraulics system and dazzling projections by Obscura Digital and batwin + robin. It is also unapologetically schmaltzy and sentimental, but all that sweetness is cut by a strain of jazziness – both in the music and dancing – that runs throughout. The sheer virtuosity of all involved also elevates it above mere treacle.

Of course the Rockettes are the star of the show. The opening number “Santa’s Reindeer” totally whets the appetite for what follows. Highlights include a “Here Comes Santa Claus” number where Santas keep multiplying – I’m thinking the entire adult company suited up for this one – and a finale satisfyingly full of high kicks. Some of the best numbers, though, are some of the oldest ones: “Parade of the Wooden Soldiers” which has been a part of the show largely unchanged since 1933, a “Living Nativity” which has evolved considerably from that time to this, and a somewhat newer but still classic delight called “Rag Dolls” which at one point features a teddy bear in a pink tutu.

Director/choreographer Julie Branam has pulled together a daunting number of elements and collaborators to put together an extravaganza that can hold its head up in the tradition of Rockettes’ legendary holiday-season shows. Recommended.