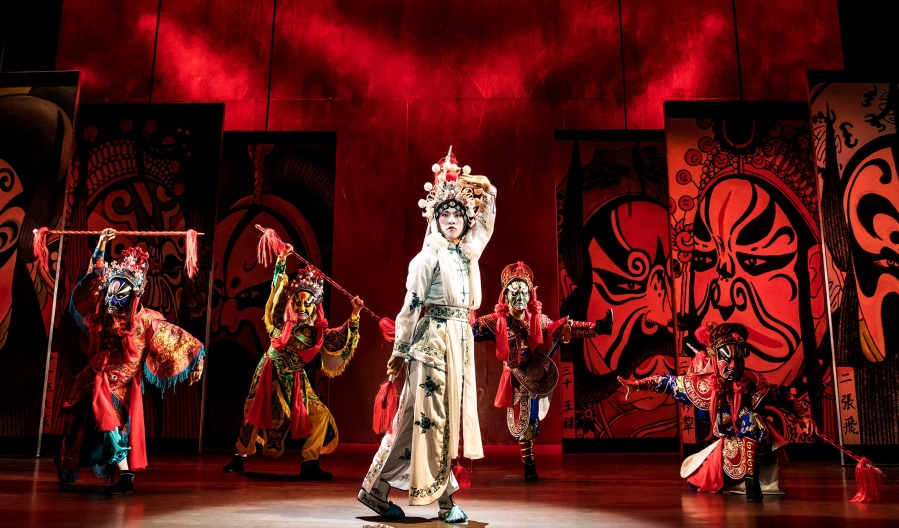 I’ve been told that this play revisal is much cooler and more cerebral than the original 1988 Broadway production, and you know what, I’m totally okay with that. Playwright David Henry Hwang is dealing with some very complex issues in M. Butterfly, and I’m more interested in exploring those with him than getting caught up in his hapless leading character’s emotional journey.

M. Butterfly, inspired by historical events, follows married French diplomat Rene Gallimard (Clive Owens) as he falls in love with jīngjù (aka “Beijing opera”) performer Song Liling (Jin Ha). Hwang has substantially revised his script, so that we learn that Song Liling is actually a man much earlier in the game. That narrative tension removed, it is much easier to follow the complicated turns that the forward rush of history forces on Gallimard and Liling’s relationship.

Director Julie Taymor, known for her use of spectacle to tell stories, here puts a greater emphasis on acting, to very good effect, underlining how much politics is very, very personal. As a matter of fact, when she uses spectacle in this production, she falters. The set is made up of moving panels – put simply, there are too many of them and they are too automated. Their lack of smooth functioning ends up being a major distraction. The spectacle that does work as it should is choreographer Ma Cong’s marvelous evocations of jīngjù and yàngbǎnxì (Maoist Revolutionary Operas).

The most outstanding thing in the production is Jin Ha’s performance as Song. He is every bit the character conjured by Hwang’s revisions, all steel and chrome under the velvet and lace, and all longing and confusion even further down. Clive Owens is such a fine actor that you lose sight of his matinee idol looks and really invest in him as the socially awkward Gallimard. Recommended.