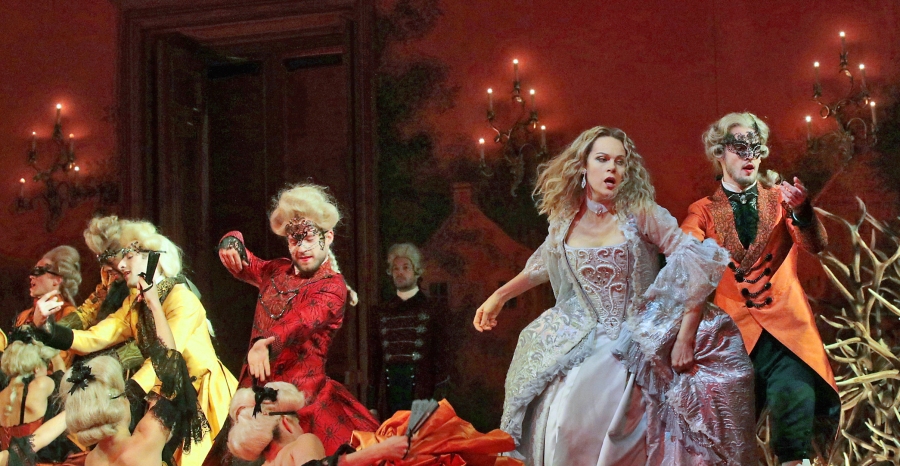 To make a longish story short, Rusalka is a tragic operatic Czech variation on The Little Mermaid. It also takes elements of the older fairy tale novella Undine (and all three have roots in the medieval legend of Melusine). There’s also a strong musical influence from Wagner here too – and not just musical: The opera opens with a trio of water spirits teasing a gnomish creature, exactly the same opening as Wagner’s Das Rheingold.

It is also very Czech. While Little Mermaid and Undine are obvious influences, the libretto takes much more directly from the fairy tales of Czech authors Karel Jaromír Erben and Božena Němcová. As with all of the works of the opera’s composer Antonín Dvořák, Rusalka draws directly on Czech folk music for its melodic and rhythmic sense. Also, Rusalka is a lake nymph in contrast to Little Mermaid‘s ocean -dwelling heroine, which makes sense for land-locked Czechia.

Director Mary Zimmerman, whose work is packed full with beauty and fantasy, is an ideal interpreter for this dark fantasy. Choreographer Austin McCormick is known for his baroque-inspired sexual fantasies, and his second act court dance goes all the way there, in breathtaking fashion. Rusalka is in the outer reaches of opera’s “standard repertoire” so I’m not surprised this is my first time hearing it. Conductor Sir Mark Elder gives it a rich and surging account which more than sold me on the opera’s many and varied pleasures.

The buzz about this production, though, is all about Kristine Opolais in the title role, and it is more than earned. She gives just the right luminescent lusciousness to the lovelorn nymph, especially in the gorgeous aria “Song to the Moon.” Eric Owens was a revelation as Nibelung dwarf Alberich in the Met’s recent Ring cycle, and he is marvelous again here as Dvořák’s similar (but much kinder) water goblin Vodník. Recommended.