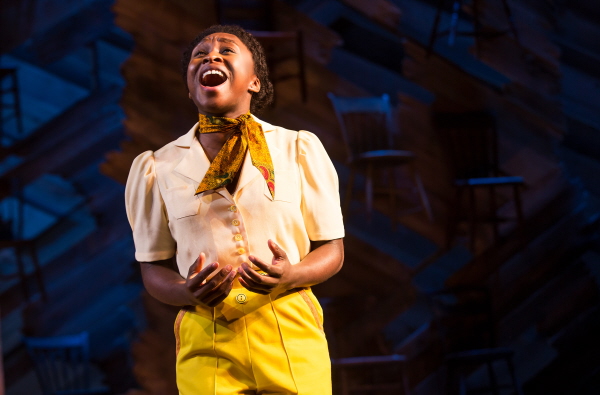 Jennifer Hudson may be the big name, but Cynthia Erivo is the event! More on that in a moment. On the off chance you haven’t read Alice Walker’s novel, seen the 1986 Steven Spielberg movie, or seen the original Broadway production of this musical here’s the gist: The Color Purple follows a poor African American woman in Georgia named Celie from her male-oppressed childhood in the 1900s through many tribulations to a kind of hopeful self-knowledge sometime in the 1930s – a great rip-roaring story, full of despair, joy and, finally, redemption.

The central role, Celie, is profoundly juicy – Whoopi Goldberg won a Golden Globe for portraying her in the movie, LaChanze a Tony for the original Broadway showing, and if Cynthia Erivo isn’t at least nominated for a Tony this time around, it’d be a crime. In some ways, she gives the biggest, most expansive reading of Celie yet. When she sings the 11 O’Clock number “I’m Here”, it’s like the sun coming out. And when she sings the final reprise of the title song, it’s the blazing light of high noon. Celie has a huge character arc, and Erivo rides it for all its worth.

Jennifer Hudson is the familiar star name in this production, playing charismatic blues singer Shug Avery. She doesn’t enter with quite the fiery bang that Shug should, but once she starts to sing, as you would expect, it’s pure pleasure. And once she gets rolling acting-wise, she makes you believe that Shug is the irresistible hunk of sensuality and life the other character’s describe.

This revival of The Color Purple started at small but mighty London theatre company Menier Chocolate Factory, and is directed by John Doyle. Both Doyle and Menier have a knack for finding soul in human-scale productions of big musicals, and this exciting production is exactly in that vein. Doyle’s stripped-down staging follows Celie’s story with laser focus, which frames Erivo’s performance perfectly.

As happens distressingly often with Broadway musicals these days, unbalanced sound design often makes it difficult to get all of the lyrics – when Erivo is getting drowned out by a flute, there’s a problem! That said, this still ends up being possibly the most satisfying version of The Color Purple yet. Highly recommended.