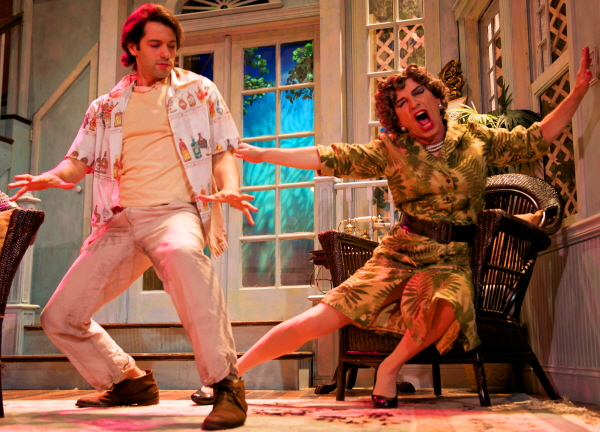 Well, this is fun! Drop Dead Perfect may not be the most substantial show ever to pay homage to “Ridiculous theatre”, but it is undeniably frisky and entertaining. It doesn’t hurt that it stars Everett Quinton, the greatest living actor in the Ridiculous tradition (and among the very best in any tradition, as far as I’m concerned).

In a story right out of the Alfred Hitchcock playbook, Quinton plays Idris Seabright, a wealthy, eccentric Key West grand dame with a psychotically unhealthy obsession with decorum and stillness, embodied by her love of painting still life. When Idris’s ward Vivien (Jason Edward Cook) threatens to abandon her to pursue sculpture in Greenwich Village, and handsome young Cuban relative Ricardo (Jason Cruz) turns up out of nowhere, her “still” life erupts into unhinged mayhem.

Idris is a delicious gargoyle of a role, and Quinton attacks it with high energy, maniacal precision and an almost supernatural conviction. Quinton expertly adds a sense of real danger and moments of sudden deep seriousness into the mix as well.

Director Joe Brancato has successfully led the other actors to a similarly vivid, kaleidoscopic acting style. Cook, for one, has created such a believably feminine character that other audience members I spoke with were surprised to see the name Jason in the program.

Both Jasons (Cook and Cruz) have a gift for athletic comedy, which Brancato uses to great advantage. Timothy C. Goodwin, who plays both the narrator and Idris’s lawyer Phineas, has a more wry, low key demeanor, which acts as a wonderful anchor and foil for the loons bouncing of the walls around him.

As the names Vivien and Ricardo suggest, this frothy concoction owes at least as much to I Love Lucy as to Hitchcock. Indeed there are Lucy references laced liberally (and comically) throughout the story. Drop Dead Perfect succeeds as a lighthearted tribute to Ridiculous theatre, and is in any event lots of fun. Recommended.