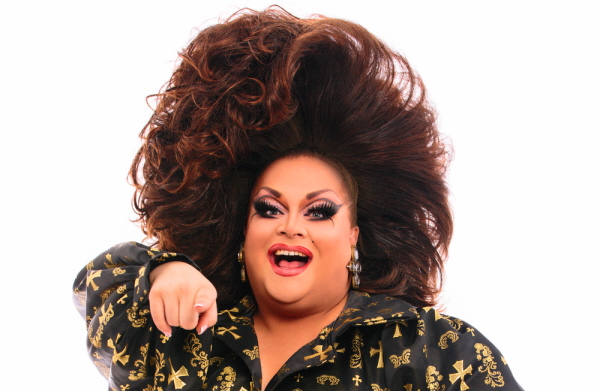 The Minj is quite the little singer! Well, maybe not little…Ginger has genuine article musical theatre training and chops, and has made the intelligent move of structuring her cabaret act Crossdresser for Christ: The Musical, A Drag Queen Confessional around a songlist made up exclusively of showtunes. She made the equally smart choice of going for variety within that songbook, using tunes from shows as disparate as Oklahoma and Hedwig and the Angry Inch.

The act is in the very traditional mold of “this is my life” autobiographical cabarets. It tracks Ginger’s life from a childhood in Southern Baptist Lake County, Florida to adventures in New York to his discovery of drag’s power in an unpromising Orlando Fringe Festival show. There is biting humor throughout – the Minj comments that the Orlando Fringe is an unjuried festival “so you know most of the shows are shit!” – and she cleverly builds the singing from the folksy and simple (“I’m Just A Girl Who Cain’t Say No”) to the complex and bravura (Stephen Schwartz’s “Meadowlark”, a favorite of divas from Betty Buckley to Patti LuPone).

It’s not a perfect show, for sure. Parts of it were polished to a high sheen, other parts seemed under- or un-rehearsed. There were precious few backstage stories from Drag Race, which is a big part of what we want to hear, isn’t it? Her dress was not truly ugly, but definitely not “glamour toad” fabulous either. And her wig, though suitably big, was brown for goodness sake! These are quibbles, though – Ginger is a real show biz pro, and had the audience in the palm of her hand for the great majority of the evening. Recommeded.