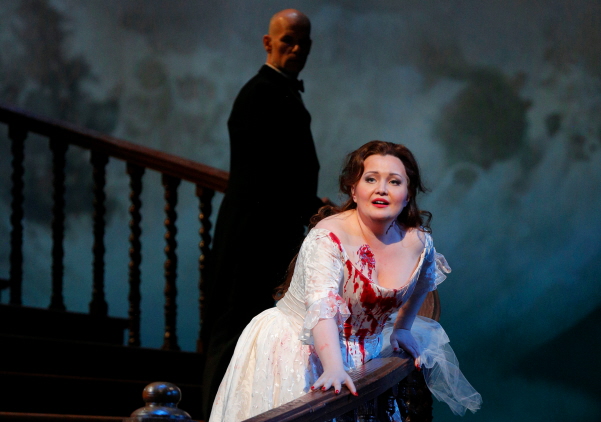 I actually liked this! My first bel canto dramma tragico – that is, early-19th Century Italian tragic opera – and I enjoyed it very much! I say that with surprise since my previous experiences with bel canto were comic operas, which left me unimpressed. Just way too lightweight for me, even though I generally prefer comedy to tragedy. Lucia di Lammermoor, though, is a full meal, packed with strong emotions and suitably soaring music.

Especially that famous “mad scene,” which I recognize from the fragment sung in the film The Fifth Element. Here, Albina Shagimuratova plays the unwilling, unhinged Scottish bride Lucia, and she delivers the mad scene’s high coloratura fireworks with ease and great expressiveness.

Director Mary Zimmerman’s production sets the action in the late 19th Century, a little under 100 years later than the actual setting of the opera. There has been a trend recently toward setting opera in this kind of vaguely Victorian style, and I have to say I’m pretty bored with it. Early 18th Century Scotland is a visually interesting environment; plus given that England and Scotland united in 1707, it’s historically interesting as well. I just don’t see the value in this particular transposition. That said, the physical production is full of beautiful tableaus – it doesn’t detract from the story too much, but it doesn’t really add anything either.

Flamboyant Australian soprano Nellie Melba (now famous for having her name attached to peaches and toast) would conclude her early 20th Century Met performances of Lucia with the mad scene – and I think she had the right idea. The opera’s final “tomb scene” finds her innamorato Edgardo lamenting over her fate and commiting suicide. He has a lovely aria “Tombe degli avi miei”, which this production’s Joseph Calleja excuted beautifully. Still, anything after that mad scene is bound to be anticlimactic.

Bel canto, you might finally have your hooks in me! I’ll just stop paying attention to you when you think you’re being funny! Recommended.