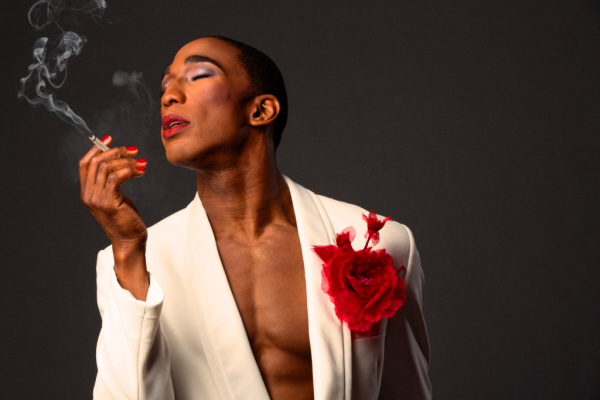 This show takes electrifying flight When Anthony Wayne is singing, channeling “The Queen of Disco” Sylvester. And since there is more singing than talking in this show, Mighty Real spends most of its time soaring through disco heaven.

Wayne is a phenomenal singer and a magnetic performer, both of which you have to be if you want to even come close to the spirit of Sylvester. His back-up singers Martha Wash (played by Jacqueline B. Arnold) and Izora Armstead (played by Anastacia McCleskey), were just as charismatic and vocally gifted as Sylvester, and Arnold and McCleskey definitely live up to that.

It should be said that none of the cast physically resembles their models (Wash and McCleskey were both so large they took on the name Two Tons O’ Fun). However, this hardly matters when they all live up to the energy and prowess of the originals on stage, which they certainly do.

As with the great majority of musicals, what problems Mighty Real has are in the book (also by Wayne). The book is without a doubt a heartfelt tribute to Sylvester, trying to get at what drove this fabulous artist, and its sincerity and depth of feeling is definitely a help.

But Wayne plays fast and loose with the timeline of Sylvester’s life, most egregiously having the teenage Sylvester watching a medley of “Respect”, “Lady Marmalade” and “Proud Mary” on TV, when all three songs were released many years after Sylvester left his childhood home.

You could make an equally fabulous medley of songs that he realistically might have seen, even by the same artists: Ike & Tina Turner’s “The Gong-Gong Song”, Patti LaBelle’s “I Sold My Heart to the Junkman” and “Something’s Got A Hold on Me” by Etta James (who Sylvester actually knew at the time). It bears saying that the medley as is does feel emotionally right, and is highly theatrical. But, still…

Perhaps even more seriously, the book has problems of tone, focusing as it does on the pain that Sylvester went through. Sylvester always wanted to project love and joy though his performances, and would probably have not been thrilled at Wayne taking this angle. Most disconcertingly, Wayne portrays Sylvester’s youthful relationship with an older man in his church as sexual molestation, when Sylvester himself always strenuously insisted that the relationship was consensual.

But again, the book takes up relatively little stage time, and in the final analysis does little to hold back the propulsive vitality of Mighty Real. This makes this fun show something I can easily recommend, just not as wholeheartedly as I might have hoped.