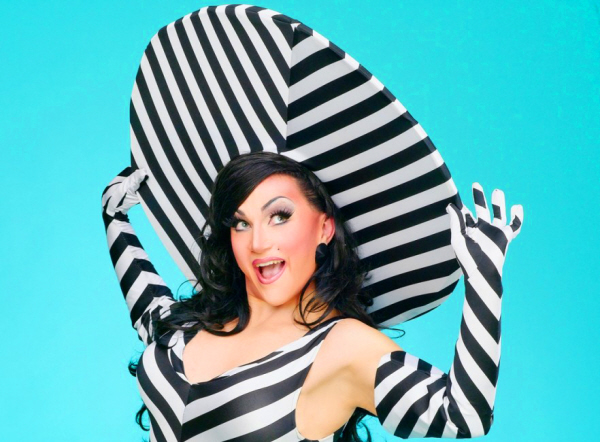 A little bit Lypsinka, a little bit Mummenchanz – certainly not what I expected when going to see a cabaret act from Drag Race alum BenDeLaCreme. Oh sure, there was plenty of other stuff in line with other drag cabarets I’ve seen: goofy song parodies, wisecracking comedy and so forth. But DeLa has something more sophisticated to offer, in a show with a seductive strangeness that creeps up on you.

The Lypsinka-y moment comes when DeLa – not known on Drag Race for her lip-synching talent – delivers a number that involves a skipping CD and warped speed changes. It’s incredibly complicated (and hilarious) and involves a level of synching technique close to the legendary Lyp.

The Mummenchanz-y stuff comes in the midst of a spectacular sequence that draws on performance art, modern dance, burlesque (where DeLa got her start) and all kinds of other art forms. Very exciting and very, very strange (in a good way). Burlesque also features in several sections of the show, including an ingenious display of twirling pasties on an assortment of fake boobs.

This act, titled Terminally Delightful, is every bit as carefully structured as Jinkx Monsoon and Major Scales’s Vaudevillians, and in some ways just as ambitious. There is an autobiographical element to this show, but it’s cleverly refracted through diverse performance styles.

BenDeLaCreme is all about fantastic and ridiculous artifice, but also ultimately really about what that artifice can communicate and express about deeper things. She delivers a show that’s equal parts clubby fun and insightful art, no small feat. Highly recommended.