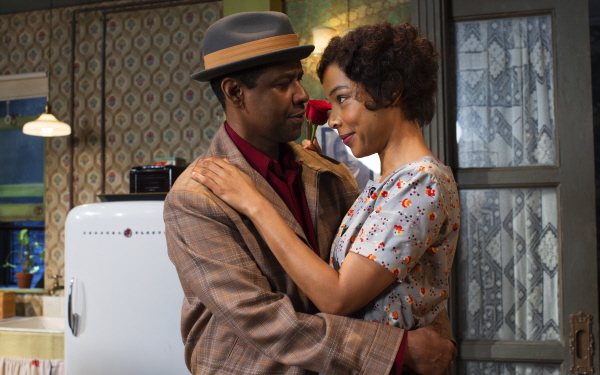 This play is, without a doubt, a masterpiece of the American theatre, and director Kenny Leon has given a solid, understated account of it. Set on Chicago’s South Side in the 1950s, A Raisin in the Sun follows the conflicting dreams among three generations of the Younger family: son Walter Lee (Denzel Washington), his wife Ruth (Sophie Okonedo), his sister Beneatha (Anika Noni Rose), his son Travis (Bryce Clyde Jenkins) and matriarch Lena (LaTanya Richardson Jackson). When Lena’s deceased husband’s life insurance money comes through, everybody has different plans for it, which makes for much of the show’s dramatic conflict.

As I said above, this is a very strong production, and would make a great introduction to this important play. To my personal taste, it’s a little too understated. Sometimes this is a good thing, as with the manner in which Denzel plays Walter’s defeated retreat into alcohol. More often, though, it’s just playing something quietly instead of with the percolating energy so evident in this play.

Denzel, while being the biggest underplayer in the bunch, does deliver a remarkably nuanced reading of Walter Lee, finding his hurt and frustration where other actors have just found braggadocio. LaTanya Richardson Jackson’s Lena follows a laudable modern trend of playing Lena as something of a dynamic force of nature, rather than the “mama on the couch” that became a stereotype of early productions of Raisin.

Anika Noni Rose is perhaps a bit too resentful as the intelligent and rebellious Beneatha, but when the script calls for her to explode in Afro-centric celebration, she does so with great panache. Sophie Okonedo gives perhaps the most remarkable performance of the evening as Walter’s stoic wife, Ruth, showing layers of desire and compassion that make her character the most dimensional one on stage. A masterpiece, masterfully done, if a bit too quietly. Recommended.