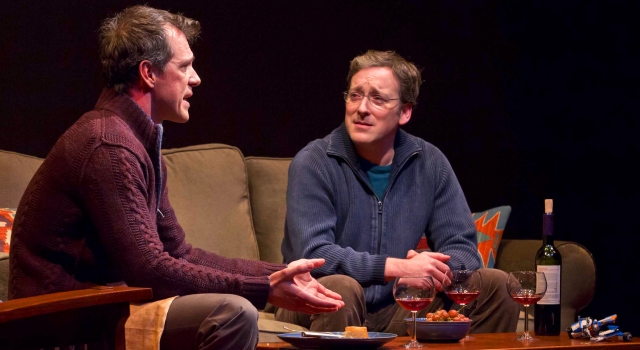 Oy, it’s like “Heteros in the Mist”! Okay, I’m kinda kidding, Dinner with Friends does depict straight married couples with a great deal of insight and sensitivity. And there are a few things in this vivid portrait that ring true for long-term gay relationships and marriages. But a lot of it is mostly of, well, anthropological interest to me – I feel like a gay Jane Goodall…

Karen (Marin Hinkle) and Gabe (Jeremy Shamos) played matchmaker with their friends Beth (Heather Burns) and Tom (Darren Pettie), and the two couples have been inseparable ever since. But when Beth and Tom’s marriage disintegrates, the couples’ friendships are also put in jeopardy.

Like I said, there are moments in the play that address those truths of marriage that transcend gay or straight. But the main heft of the plot is driven by something that in my experience is much more a straight thing: doing things in your life and marriage because it’s what’s expected of you, either by society in general, or your small circle of friends. Us gay marrieds start out by doing the unexpected, so it’s a bit hard to relate or really be moved.

I can’t deny that playwright Donald Margulies is at his best here. The characters are complex, full human beings, especially the play’s flawed moral center Gabe (play with great warmth by Shamos), and their interactions pull you along rather than push. This is very nuanced stuff, and director Pam MacKinnon does not ignore a single detail. So all in all, a worthy, smart, well-done effort, but not anything that speaks to me personally.