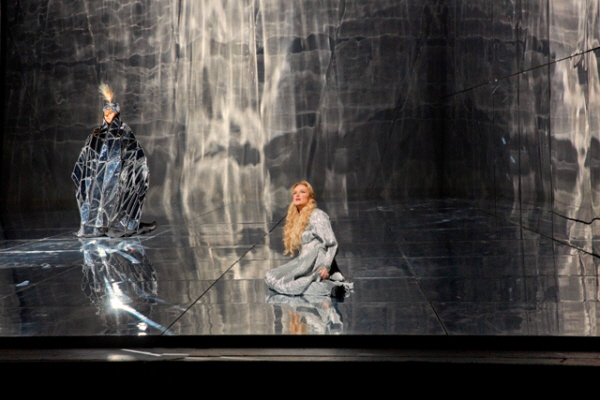 This production features some of the most beautiful singing I’ve heard at the Met this season, but the real star is conductor Vladimir Jurowski, who took composer Richard Strauss’s already gorgeous orchestrations into new realms of sumptuousness and luminosity. The late Herbert Wernicke’s visually stunning production (restaged by J. Knighten Smit), does Hugo Hofmannsthal’s strange libretto many favors, but Die Frau Ohne Schatten is still a fundamentally problematic piece, even by the reality-optional standards of opera (those standards, by the way, is one of the reasons this surrealist is steadily gaining a taste for the form).

A daughter of the god Keikobad, now called the Empress, lives in a mystical realm: she was captured by a human hunter, now called the Emperor. They married, but she has no shadow. Keikobad decrees that she must acquire a shadow before a year passes, or he will reclaim her and turn the Emperor to stone. The Empress’s nurse offers the wife of a human fabric dyer untold pleasures if she will give up her shadow.

So far, so entertainingly odd, right? Here’s the problem: Hofmannsthal, in the early part of the libretto, does a terrific job of depicting the dyer’s wife as a woman wracked by psychologically realistic anxiety about bearing children, or about even being married in the first place. Later on, though, she only really falls for her husband when he threatens to kill her.

Now, there are plenty of operas where murderous jealousy and the like play out without being terribly offensive. What makes this one so problematic is that a woman who initially behaves in a way that is so believably, humanly fallible, suddenly turns into a caricature of the operatic martyr when her hubby starts acting like a caricature of a possessive jerk. If she had been more of a caricature in the first place, this would have been simple operatic plotiness and intrigue. But because of the set-up, it feels like we are being asked to accept her change of heart under these circumstances as realistic, even laudable. And that, is offensive.