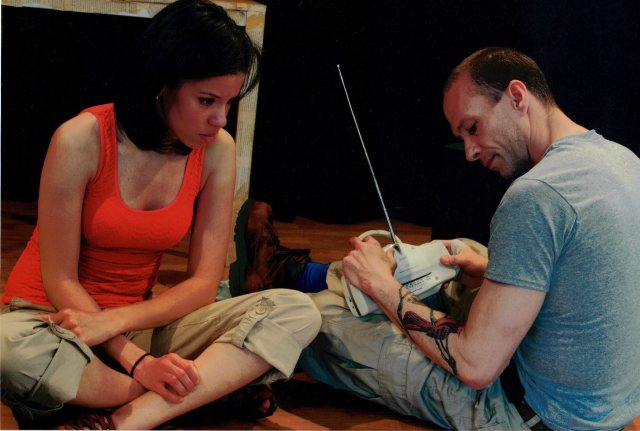 Playwright/actor J. Stephen Brantley (pictured above, right) set his gay-themed play Pirira  during the July 20, 2011 riots in the African nation of Malawi. As that country erupts in riots, American aid workers Jack and Ericka take shelter in the storage room of a struggling NGO. Half a world away, Malawian student Gilbert and his gay co-worker Chad begin another day in the back room of a Manhattan florist. By the day’s end, they discover their lives are inextricably linked across continents, language, and time. I asked Brantley to provide some insight into this intriguing work.

Pirira tracks two seemingly unrelated stories, separated by 7000 miles, simultaneously. It’s about the unexpected ways in which our lives are connected with, and our identities are tied to, people who may be very different from us. One of these stories is about American NGO workers in Malawi during the 2011 demonstrations. The other features a Malawian student in the states working in a wholesale florist’s with a gay New Yorker. Audiences see both unfold at once, in the same space, in real time.

You also act in Pirira. What’s that been like for you?
Really challenging. I’ve acted in my own work many times, and I’m writing a one-man thing for myself at the moment. But Pirira is different. Maybe because of the complex musical architecture of the piece, maybe because it all feels so personal…Jack is not an easy role to act anyway, but I find it nearly impossible to do so when I’m in my playwright head at all. It’s never been like that for me, but some nights it’s like going to battle with myself.
I know you’ve been thinking about writing plays about Africa for a long time. Is this the final result, or is this a subject you might continue to pursue in other plays?
Pirira is probably not my only Malawi play. I packed a lot into this one, but there is much more I want to say about that place and the people there. My big dream is to write something there, on African soil, and maybe work with some Malawian performers in putting it up.
You have long been concerned about the situation of gays in Africa. How can our readers help or get involved?
It’s tricky. Change comes slowly to Africa, and rarely at the demands of progressive-minded Americans. And yet, I know for sure that LGBT people in Malawi, in Uganda, and in the rest of the continent need and want our support. I’m a huge fan of Frank Mugisha and Sexual Minorities Uganda. Sign up for and share updates from the International Lesbian and Gay Human Rights Commission. And in Malawi, and organization called CEDEP is one of the few NGOs championing LGBT rights. Their office was smashed up a few weeks ago, and they could certainly use our support. Educate yourself. Sign the online petitions. Just cultivating an awareness that LGBT rights is a global issue, and a matter of life and death in much of the world, will get us closer to true equality and human dignity for all.
For tickets, click here.