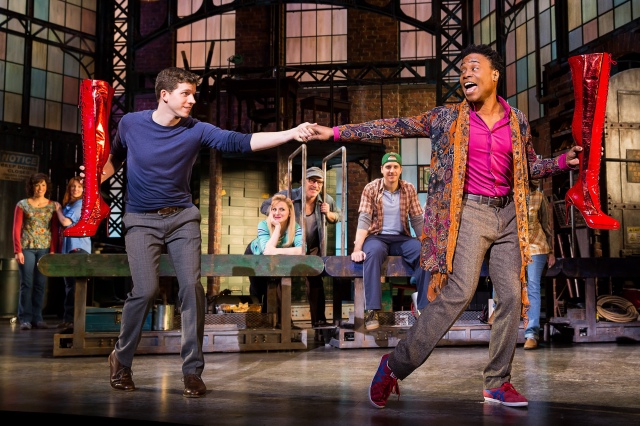 This is very much in the mold of musicals like Hairspray and Priscilla, Queen of the Desert – both shows in which Kinky Boots‘ director/choreographer Jerry Mitchell had a major hand, it should be mentioned. Like them it’s a splashy, colorful, drag-filled joyride of a show, with a soft-sold message of tolerance that never gets in the way of high-energy production numbers. And like those shows, I predict Kinky Boots will be a big fat hit (if I had to guess, I’d say bigger than Priscilla, not as big as Hairspray).

This musical’s main pursuit is fizzy entertainment, and it more than achieves that goal. It’s much more cohesive than Mitchell’s previous directing foray Legally Blonde, leading me to feel that he has become that rarest of creatures, a director/choreographer who does both equally well. Harvey Fierstein’s book is his usual, delightful model of traditional Broadway with a gimlet eye but a heart of gold. Cyndi Lauper’s music is appropriately emotional and propulsive.

The show’s most major flaw – and it really isn’t that major – is that Lauper’s lyrics can sometimes be a little “on the nose” with things like “where do I fit in,” “is this my destiny,” “what do I really want,” and the like. But she certainly doesn’t do that all the time: her “History of Wrong Guys” is marvellously specific; delivered with wonderful comic timing by Annaleigh Ashford, it’s one of the show’s high points.

Also terrific is Billy Porter as Lola – he’s deliciously over-the-top, at one point turning “sex” into a three-syllable word. And as Simon, the man behind the Lola persona, Porter can also be quite poignantly understated. Stark Sands is also quite winning as factory owner Charlie. Ultimately, though, it doesn’t matter what I and other critics say. Kinky Boots is a breezy crowd pleaser that I for one have no hesitation in recommending.