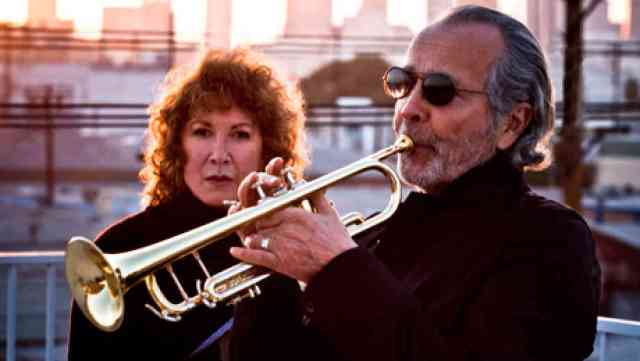 Although she was born and raised in Chicago, Lani Hall understands and communicates the soul of Brazilian music better than many Brazilian artists. She really gets the dark colors that give the oh-so-cool bossa nova its depth – what saxaphonist Stan Getz, the great jazz popularizer of bossa nova, perhaps too dramatically called its “fatalism.” She understands it so well that she can apply it to gringo standards like “Let’s Face the Music and Dance” or “Anything Goes”, making those masterpieces even more dimensional than they already were.

In the cabaret show they are doing at the Cafe Carlyle, Hall, her husband famed trumpeter Herb Alpert, and the expert players behind them display outlandish spontaneity more thrillingly than I think I’ve ever experienced in a cabaret (except for the last time I saw them). Alpert is most associated with his group the Tijuana Brass, and was also a recording industry executive: he is the “A” of A&M Records, which he founded with business partner Jerry Moss. Lani sang with A&M artist Sergio Mendes and Brasil ’66, most famously on their hit version of “Mas Que Nada” – that’s where she got her Brazilain bona fides.

In the act at the Carlyle they perform selections from the two albums they’ve recently recorded together (the first time in their 33-year-long marriage that they’ve collaborated in that way), as well as stuff from a new one and a medley of Tijuana Brass hits. I can’t overstate the impressive and exciting musicianship in this act. Alpert and his excellent keyboardist Bill Cantos have structured the songs in intricate ways that leave abundant room for improvisation. They may play the same songs from night to night, but musically every performance will be utterly different.

Alpert is a breathtakingly soulful player – the brashness of the Tijuana Brass years now tempered with attention to innovations of younger artists like Terence Blachard – and Lani has that kind of liquid crystal voice that songwriters dream of. Most impressive of all was a reworking of brilliant Brazilian songwriter Edu Lobo’s “Viola Fora de Moda”, which Alpert has given a magnificently complex structure; it allows the powerfully present Hall and the band to lock into a groove and improvise their way into the stratosphere. Stunning.