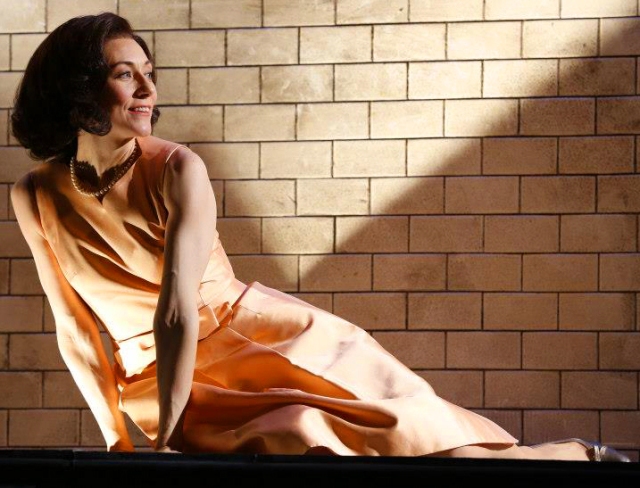 Jackie – a theatrical dissection of Jacqueline Kennedy Onassis and the myths surrounding her – is without a doubt the best high art solo performance piece I’ve ever seen or read. And, because of love affairs with high art and solo performance, I’ve seen and read more of those than you might think.

It’s very German, which isn’t necessarily a compliment (don’t get me wrong, though, I really liked Jackie) – contemporary German literature can be verbose and pretentious, and German literature as a whole has a tendency toward the heavy, slow and laborious. However, while Jackie is certianly verbose – JKO certainly never carried on as volubly as this – it has real smarts in place of pretension. And while it is indeed dense with philosophy and wordplay, playwright Elfride Jelinek makes that dense language dance ever so lightly.

But it’s Benko who really makes this Jackie land. There’s just a hint of Jackie’s breathiness; however, this isn’t a realistic Jackie, it’s her image and spirit speaking from beyond the grave. That creature has all kinds of voices, from growls to purrs, from declamation to seduction. Benko fully inhabits every tone, every idea, with the most intense precision. Truly a tour de force!