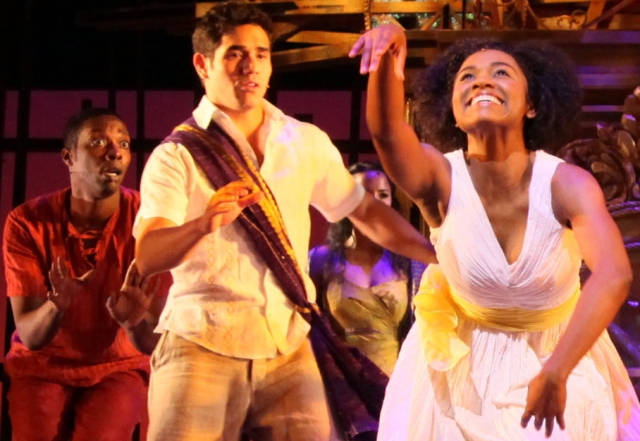 This is my first time seeing Once on This Island, the musical that first brought the musical theatre team of composer Stephen Flaherty and lyricist Lynn Ahrens to wide acclaim. It did not soar to the top of my list of Flaherty & Ahrens shows – Seussical and Ragtime are still firmly ensconced up there – but I do now understand the appeal of its vigorous Caribbean-flavored score. It’s the show as a whole I have some problems with.

Once on This Island tells of Ti Moune (American Idol contestant Syesha Mercado), a peasant girl who rescues and falls in love with Daniel (the smoothly pretty Adam Jacobs), a wealthy boy from the other side of a fictional island in the Antilles. The island gods test the strength of her love against the powerful forces of prejudice, hatred and death.

My problem rests in the underlying feeling that the “exoticism” of the Caribbean is being exploited rather than explored. Flaherty & Ahrens bring up the issues of economic inequality on the island, but never really critique them (as they later did with racism in Ragtime and homophobia in A Man of No Importance). Daniel is essentially a rich boy who gets away with everything with no consequences – and that’s not okay.

That said, the Paper Mill production successfully emphasizes the musical’s considerable strengths. Director Thomas Kail has a real gift for pacing, and this Island clicks right along, with inventive, pared-down staging. Kenny Posner is one of my favorite lighting designers, and his work here captures the magic of this pseudo-mythical story. And Bradley Rapier’s athletic choreography is the engine that really drives this dance-heavy show.

In the final analysis, there is plenty here to entertain both adults and children. I’m just not sure I want the kiddies leaving with the essentially conservative message of Once on This Island.