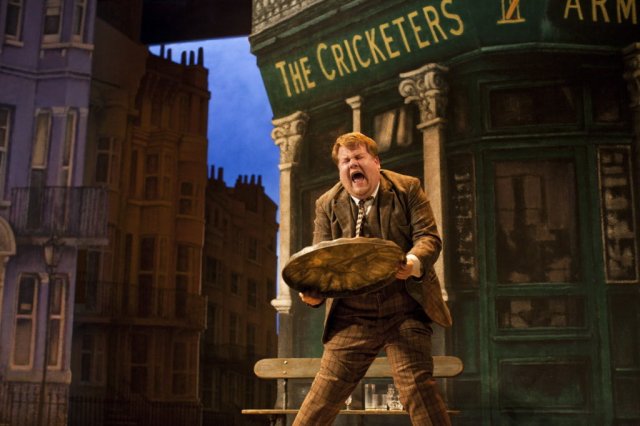 This is by far, bar none, the most hilarious show to open on Broadway this season! In One Man, Two Guvnors, brilliant Brit comic actor James Corden stars as Francis Henshall, a hungry and and easily-confused working class bloke in early 1960s Brighton, on the south coast of England. Francis agrees to work for a local gangster (who is not what he seems) and another smooth criminal on the lam…none of which Francis can keep straight.

I’ve often said that writing a rave review is much harder than writing a pan – the language of insult is so much more plentiful and colorful than the language of praise. And that’s true here: what else can I say but that it’s freaking hilarious, so funny it made my ribcage hurt from laughing? Cordon is an immensely talented stage comedian, with every bit of the abandon and shamelessness of, say, a Nathan Lane. He’s nearly beat in the physical comedy department by Tom Edden, as the elderly, shaky-handed waiter Alfie – I’ve seen very few performers who committed as totally to slapstick as Edden, and he’s a real joy to watch.

Playwright Richard Bean adapted the play from Carlo Goldoni’s Servant of Two Masters, an 18th Century farce, which Goldoni himself adapted from the stock characters of the unscripted commedia dell’arte. Setting the action in Brighton in the relatively innocent time of the early 1960s was a terrific choice on Bean’s part and it definitely gives the comedy some extra fun and zing.

To underline the period setting, director Nicholas Hynter has added a band in natty matching sharkskin suits who play skiffle in the first act, and Merseybeat rock in the second. This is the only thing in the show that doesn’t quite work – those peculiarly English forms of music, while appropriately energetic, don’t have quite the same nostalgic pull in New York that they must have had in London, and I found myself wanting to the band to finish long before they actually did. Hynter has smartly made the musical interludes in the show much shorter at the end than at the beginning, but they could be trimmed even more.

That’s a small complaint, though, for a show that is this much joyful fun. One Man, Two Guvnors is not to be missed!