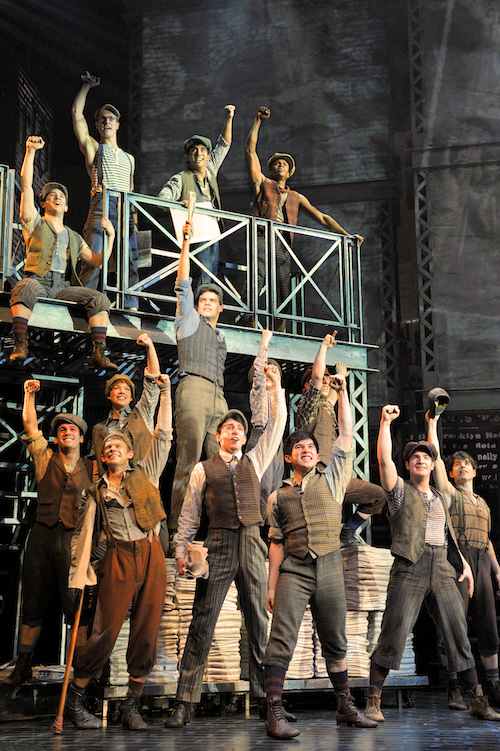 Newsies has the Twinkiest. Chorus. Ever. On the top of that, it also features one of the sexiest young leading men to come along in years, Broadway-star-in-the-making Jeremy Jordan, who plays Jack Kelly, a charismatic newsboy in late 19th Century New York. Newsies is inspired by the real-life “Newsboy Strike of 1899,” in which one Kid Blink led a band of orphan and runaway newsies on a two-week-long strike against powerful newspaper publishers like Pulitzer and Hearst.

While there’s a lot about this show that is very traditional, even a bit formulaic (Jack Kelly isn’t nearly as eccentric as Kid Blink was), its heart is subtly subversive. I mean, this is a Disney musical aimed at tweens and teens that celebrates labor unions, for goodness sake. And I don’t know whether it was conscious or not, but director Jeff Calhoun’s staging and designer’s Tobin Ost’s set are very reminiscent of German director Erwin Piscator, who was one of the most passionate unionists the theatre has ever known.

And, while I might not be in any way the show’s target audience, Newsies still really hits home for me. Piscator is one of my biggest role models as a director, and, like gay rights pioneer Harry Hay (another role model), the combination of music and politics makes me emotional, even a bit weepy. It was hard for me to keep it together for the rousing cry to strike “The World Will Know” – this song in particular is Menken at his very best.

Kara Lindsay is terrific as Kelly’s love interest Katherine, especially in her soliloquy number “Watch What Happens”. I never saw the cult Disney film on which Newsies is based, but the stage version certainly stands sturdily on its own. Plus, all that twink eye candy doesn’t hurt one bit, especially as they spend what seem like minutes in midair executing Christopher Gattelli’s acrobatic choreography!