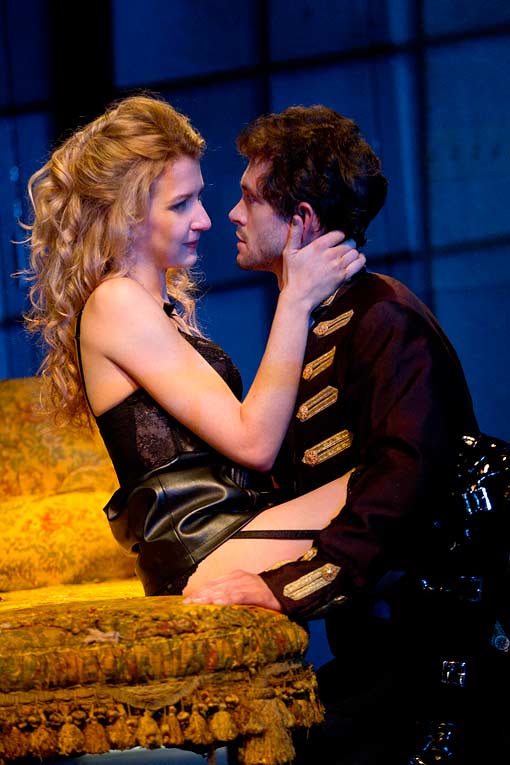 How do you adapt one of the cornerstones of kinky culture, without creating pornography? Playwright David Ives has come up with a very creative solution for this smart, sexy show, by showing us an extended, out-of-control audition in which a director and an actress act out the major scenes in Venus in Fur, a watershed 1870 novel by Leopold von Sacher-Masoch – a book so sexually ahead of its time that the word “masochism” was derived from the author’s name.

Vanda (star-in-the-making Nina Arianda) is a young actress determined to land the lead in a new play based on Venus in Fur. Or at least that’s what she claims to be, though hints are dropped pretty quickly that she may be up to more. The adorable Hugh Dancy, wearing a very tight gray t-shirt, plays Thomas, the play’s adapter/director. While Ives’s main thematic prey is the psycho-sexual depths explored in the novel, he also takes ample delight in pointing out the sadomasochistic truth about show business, and auditions in particular.

The play is especially delicious as a tour de force for two actors. As wonderful as Arianda was in Born Yesterday, she is positively dazzling here. And Dancy is a terrific foil – it’s very hot indeed to see this hunk’s skin get flushed in some of the show’s more intense moments.

The show’s handful of failings include being too long (even at an hour and 45 minutes, there still is much that could be cut) and the occasional lapse into lazy pretension. That said, Ives has done a marvelous job of making sure that the play isn’t just red meat for actors, but a roller coaster of a good time for the audience. Venus in Fur is a hot plate of kinky fun.

2 thoughts on “Review: Venus In Fur”