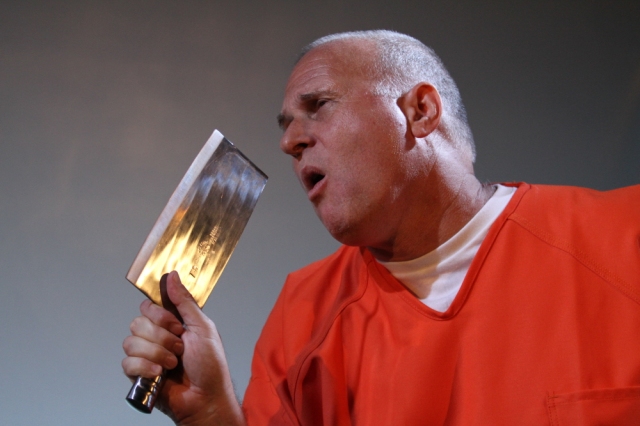 This August, I will be directing Avner Kam’s Jeffrey Dahmer Live at FringeNYC.

Jeffery Dahmer Live combines personal stories and hummable songs as it explores disturbingly mundane and human behind the extreme actions of the infamous title character. The setting: the jailed Dahmer, struggling to understand what has happened, creates a solo show with the aid of the prison drama club.

In 2011 it is 20 years since Dahmer’s “big reveal”, but he is still present, mentioned daily on the web; last year, Ke$ha, released “Cannibal” where she name-checked Dahmer, reaffirming his position as a cultural brand.

The show examines the case from various angles. The stories are factually correct, but the internal thought process and songs are creative extensions of the actual confessions. The character is placed in the cultural context of his time and prior, though the humor is, naturally, current.

Stories, songs and performance are by Avner Kam; he previously mashed his personality with those of Roy Rogers and Britney Spears. His previous solo show, The Singing Cowboy and His Invisible Backup Singers, played off-off Broadway, and the award-winning video for his signature song “I Want to Be like Roy Rogers (Yee Haw!)” played on MTV. Mr. Kam has honed his storytelling skills at The Moth where he won story slams. He is currently developing his next solo show: Helen Keller Live. Avner Kam is involved with FringeNYC behind the scenes. He is serving as their International Ambassador for the last 8 years, and his column, The Personal Shopper, humorously summarizes the yearly trends within the festival for their Propaganda publication.

For more information on my directing work, see jonathanwarman.com.