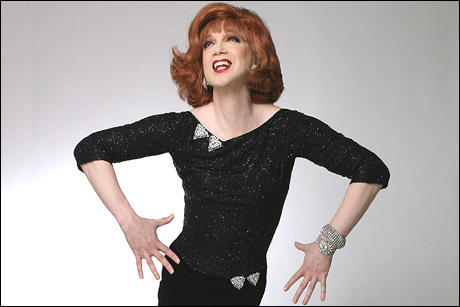 Die Mommie Die! is the fourth New York premiere of a play by playwright Charles Busch I’ve seen, and the second to feature him acting a leading drag role. Saying that it’s the most predictable isn’t that serious a criticism: it’s predictably campy, funny and entertaining.

I know from the Drama Dept. production of his Shanghai Moon the complexity he brings to a drag role he’s created for himself. In comic 1960s Hollywood noir Die Mommie Die! that role is Angela Arden, a fallen singing star trapped in an insufferable marriage to film producer Sol Sussman. Desperate to find happiness with her younger lover, Angela gruesomely murders her husband with the aid of a poisoned suppository, leaving her two children to avenge their father’s death.

The plot is very clearly cribbed from the ancient Greek trilogy Oresteia by Aeschylus –  one the characters even says “mourning becomes this house,” a sly reference to Mourning Becomes Electra, Eugene O’Neill’s adaptation of Oresteia – but it’s Greek tragedy through the prism of 60s Hollywood, right down to an intentionally absurd tacked-on happy ending.

The play is set in 1967, and Busch is very precise about his pop culture references. He successfully catches the sensibility of an entertainment industry trying to keep up with confusing changing times, all the while relying on tried and true techniques. Busch’s own acting style – simultaneously sincere and gleefully artificial – is perfect for capturing the
spirit of “the summer of love.”

Busch sincerely loves artifice and invests every moment he has on-stage with substantial style. He may, for example, deliver a line in the manner of Bette Davis, but it’s not that he’s kidding or parodying Davis. We also take pleasure in the effortless ease with which he moves from one glittering camp archetype to another. They don’t make ’em like this anymore, and there’s only one Charles Busch.