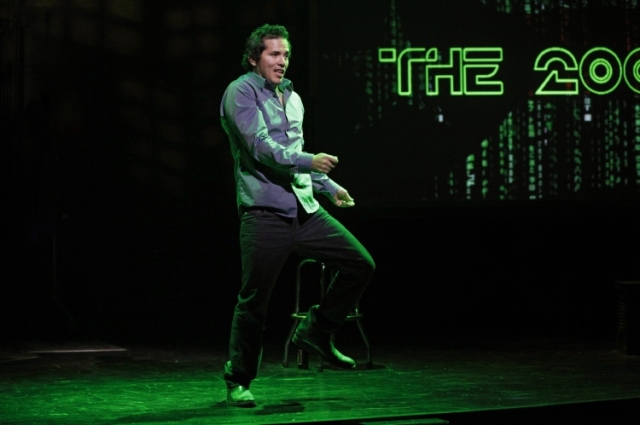 There’s no denying that John Leguizamo performs with great power and energy, or that he writes with surprising emotional directness and self-deprecation. All this makes Ghetto Klown a thoroughly engaging evening – it gave me a greater appreciation for the depth and breadth of Leguizamo’s talent, even if it didn’t exactly make me a fan.

Because, after all is said and done, there’s still something too arrogantly macho about Leguizamo’s personality, which I find off-putting. I mean, with the revealing and sometimes embarrassing stories he tells in Ghetto Klown, I feel more sympathy for him than I have before, but still feel a difficult distance between his point of view and mine.

I didn’t go see his previous solo show Sexaholix because of that distance, but Klown‘s focus on career as opposed to family life piqued my interest. And he does indeed take us on an exciting trip that includes encounters with Lee Strasberg and the Lower East Side performance art and comedy scenes of the early 1980s, as Leguizamo evolves from Queens class clown to a struggling young Manhattan actor.

As the story moves onto the sets of the major motion pictures he’s been involved with, we enter celebrity gossip territory to generally entertaining effect. The show takes its title from a moment when, while filming Carlito’s Way, Al Pacino calls Leguizamo a clown because of his tendency to liberally ad lib when filming.

Leguizamo tells it all with vivid detail, wicked humor, high intensity and deadly accurate impersonations of people both famous and unknown. Ghetto Klown was much more enjoyable than I expected, and I can easily recommend it to people who, like myself, aren’t a natural part of his fan base.