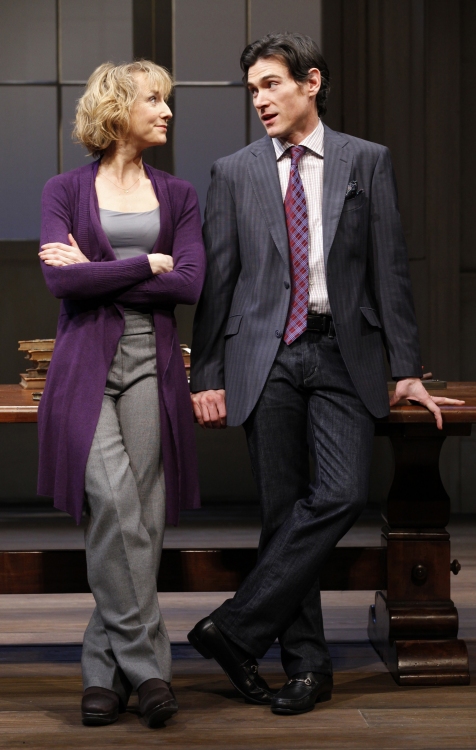 I’d only ever read this play before, and it plays much better than it reads, especially in the hands of a company as gifted as this. In fact, with this production, Arcadia has become by far my favorite Tom Stoppard play (though I’m still not his greatest fan).

In Arcadia, extremely intelligent teenage aristocrat Thomasina tinkers playfully with a startling theory whose practical implications escape her, in a stately home of 1809 England. Her tutor Septimus, who is very nearly as much of a genius as she is, struggles to keep up. Professional and private passions preoccupy the other adults of the household, as the sounds of gunfire and steam engines disturb the idyllic calm. Two hundred years later, academic adversaries Hannah and Bernard try to piece together just what was happening in 1809 – it seems poet Lord Byron may have passed through – getting it wrong as often as they get it right.

As with any Stoppard play, Arcadia is intellectual to the point of nerdiness, but wears its erudition more lightly than any other play of his I can think of. Instead of showing off his own cleverness (as he often does), Stoppard portrays clever people, all deeply flawed and identifiably human. Arcadia spends most of its time in an elegant balance of suspense and sympathy, a place his recent plays Rock and Roll and The Coast of Utopia only reached in sporadic moments.

Director David Leveaux is not particularly known for having a light touch, but this time out he has the lightest, giving delicate support to a uniformly brilliant ensemble. Billy Crudup stands out as showboating Byron scholar Bernard Nightingale, deliciously playing up the unrelenting joy he feels in his work. Rarely has a Broadway performance made publishing in academic journals seem like such fun!