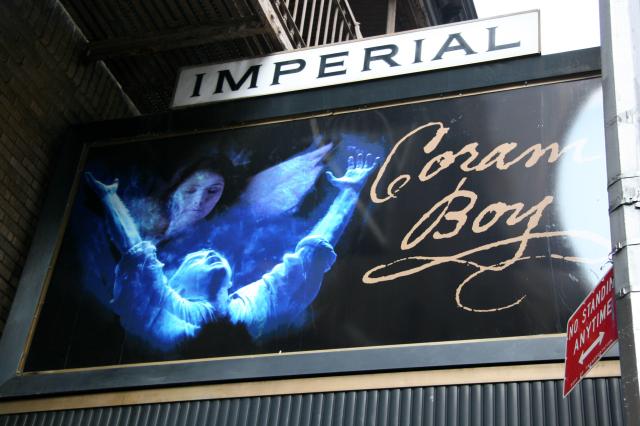 This is one of the most gratifying Broadway spectaculars in recent years. Coram Boy may not be the deepest show you’ve ever seen, but it is exquisitely well-crafted, gorgeously designed and seat-of-your-pants gripping. This play is set in 18th-century England, and features unequivocal good guys (choirboy teenagers who truly, deeply, madly love music) and bad guys (a scowling but honorable mean dad and a truly mustache-twirling villain who moves from ghastly infanticide to human trafficking). As someone who doesn’t like Les Mis but liked Hugo’s novel and gets its appeal,  Coram Boy is very much the show I wished Mis could be.

The “Coram” of the title is a home for deserted children, which forms the fulcrum of the complicated plot of this deeply-felt sentimental thriller. The “Coram Home” actually existed in the London of the day. It was a charity dear to the heart of G. F. Handel, the composer of the “Hallelujah Chorus”, whose music is key to the plot – and theatrical impact – of Coram Boy. This National Theatre production from Britain, directed by Melly Still, features a full orchestra and chorus who provide underscoring that beats anything you’ll hear at the movies, as well as interpretations of Handel’s music that would leave only the hardest heart unmoved. This is very traditional, well-made theater at its satisfying best.