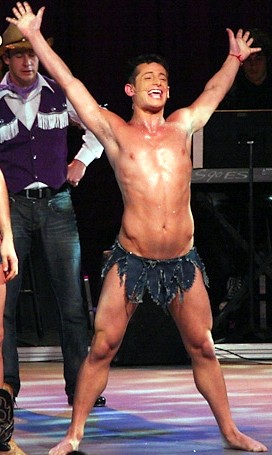 The winner of the first annual Mr. Broadway pageant held last Monday, April 30th, Mr. “Mamma Mia” Frankie James Grande, is living proof that saying “she ain’t right” doesn’t preclude sexiness – crazy can be crazy hot! Grande went way out on a limb with his “talent” performance, singing “You’re the One that I Want” as Gollum from “Lord of the Rings.”

He went even further, mixing in the idea that Gollum was a contestant on the recent “Grease” casting show bearing that song’s name. It certainly didn’t hurt that ultra-athletic back flips were part of his act, or that he sang in a loincloth, or that his swimsuit was the skimpiest of the lot (combined with body oil, which host Tovah Feldshuh praised as “attention to detail”).

Judge Seth Rudetsky (a Broadway musician also known for his one-man show “Rhapsody in Seth”, and “Broadway Chatterbox” his weekly live talk show at Don’t Tell Mama) revealed that “Nancy Opel and I did a show together on Saturday and we looked at each other and said ‘This pageant on Monday could really be awful.’ We’ll do it for the terrific organization it benefits –the Ali Forney Center (AFC) which provides shelter for homeless LGBT youth in New York City – but we were both sort of dreading it.”

“But,” Rudetsky enthuses, “it was so well done! Amazing, so well produced, the talent level was incredible, I thought. Tovah Feldshuh, the host, was hilarious, doing her Borscht Belt shtick, which the audience just ate up. I totally want to do it again! I mean I’d love to be in it but I’d have to do a 40 pound weight loss and drop 20 years in age. I was so impressed with the acts, they could have just come out and sang their audition songs, but they were so well thought out and brave.”

Each of the contestants went head to head in talent, interview and swimsuit competitions in front of judges who are celebrities on the Great White Way – or nearby gay bars — but ultimately, the final vote was left in the audience’s hands. The judges were Scott Nevins, Opel and Rudetsky.

Grande wasn’t the only candidate to rely on comedy: Mr. “Mary Poppins” Kevin Yee gave an interpretation of Tom Jones’s “Sex Bomb” that playfully parodied boy-band choreography and costuming (Yee was part of boy-band Youth Asylum when he was a teenager).

Mr. “Curtains” Ward Billeisen earned points for dressing elegantly for his talent, but lost points for singing the melodically easy “Moondance.” His swimsuit featured “curtains” that rose to reveal his bare butt, which the judges found provocative for its combination of cleverness and sexiness.

Mr. “Wicked” Kenway Kua’s talent was a dance that also involved a serious story about finding self-esteem and some artful choreography. Full disclosure: Kua got my vote because the choreography was his own, and incorporated technically difficult moves and good storytelling – and, yes, a gradual shedding of costume revealing his svelte physique.

Mr. “A Chorus Line” Paul McGill both hacked off and challenged the judges with an early revelation that he was only 19, born in 1987. He also caused a stir in the swimsuit competition with a package that was either quite well-hung or artfully-stuffed. “It was crazy,” said Rudetsky. “Did he wrap his dick four times over? I don’t understand how it can look like that.” In the interview section he did a very hard to-the-ground split. Maybe that’s why he was first runner up to Grande — though it might also be because he very nearly nailed the Michael Bennett‘s choreography for “Music and the Mirror,” a bravura dance number from “Line” in heels no less, which he chose for his talent.

Mr. “Hairspray,” Arbinder Robinson is clearly a singer before everything else, staking everything on his interpretation of “Georgia on My Mind” which he delivered with chops that more closely resembled real soul than “American Idol” screaming. He copped out on the swimsuit portion of the evening, but was candid and winning in the interview, speaking about his upbringing and theatrical career.

Mr. “Tarzan” Nick Sanchez got major technical points for attempting to set a world record for toe touches (high jumps with hands extended to meet the feet) – he made it to 50. He charmed the judges, especially Nevins, in the interview, and caused a stir by swallowing an entire bottle of Corona during his swimsuit walk.

On the subject of the Center’s financial need AFC Executive Director Carl Siciliano comments that “We want only the best for the kids in our program. The services they can get from the government are minimal. It’s like getting a baloney sandwich when they need and deserve a four-course meal. At the Ali Forney Center, we want to make sure they get the four-course meal.”

Ali Forney was a homeless queer teen who was forced to live on the streets of New York during the 1990s. Ali was dedicated to the safety of other homeless queer youth; he was a committed HIV prevention worker, and aggressively advocated that the NYPD investigate a series of murders of the homeless queer youth he had befriended. In December of 1997, Ali was murdered on the streets. His tragic death called attention to the atrocious conditions for homeless queer youth in New York. Ali’s murderer has never been identified. According to AFC statistics, as LGBT teens come out of the closet, 25% are rejected by their families, 11.5% of gay and lesbian youth report being physically attacked by family members and 42% of homeless youth self-identify as gay or lesbian.

AFC was started in June 2002 in response to the lack of safe shelter for LGBT youth in New York City. They are committed to providing LGBT youth with safe, dignified, nurturing environments where their needs can be met and where they can begin to put their lives back together. AFC has quickly become the nation’s largest and most comprehensive organization dedicated to homeless LGBT youth. AFC currently provides help for 2,000 persons a year with services including three emergency housing sites, three transitional housing sites, a network of resources in New York City, and a day center that offers clinical and support services.

While the total amount raised had not been tallied at press time, the audience was given the opportunity after the show to make an additional donation to the Ali Forney Center, resulting in over $2000 in cash raised at the door alone.