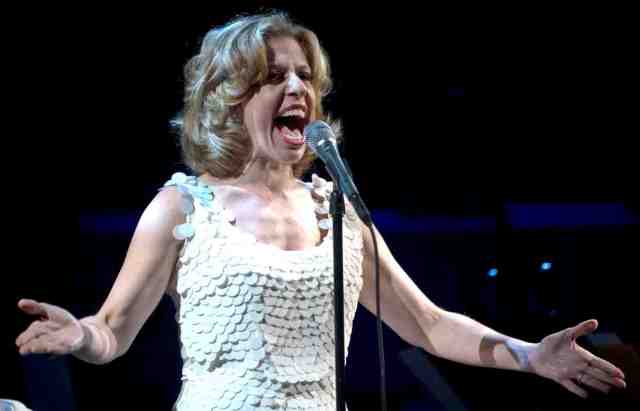 One of the city’s best comic actresses, Jackie Hoffman has often used her cabaret acts at Joe’s Pub—which consistently outsell any other show at that venue—to tell hilarious self-deprecating jokes about the sad state of her career. Now that she’s doing well enough to escape her love/hate relationship with unpaid benefits, she focuses more on the downside of working at institutions like Manhattan Theatre Club. She’s a bit taken aback by audiences in which 95-year-old socialite Kitty Carlisle Hart is the junior member.

Better still, she tells of “trading up” to her first regional theater production—Wendy Wasserstein’s “The Sisters Rosensweig” at the Old Globe Theatre in San Diego. While she describes that production as generally a good experience, it’s a bit surreal for this downtown New York diva. For one thing, the Globe people inexplicably house Jackie at a hotel that is obviously primarily a gay hook-up joint.

The topic that gets the most stage time in this hilarious, wide-ranging monologue is Hoffman’s medical problems—most particularly a growth on her uterus. For a while it seems like it might be cancer, which you wouldn’t think would be funny. Thanks to Hoffman’s fantastically twisted sense of humor, though, she has the audience quivering with laughter as she sings about tumors and childlessness.

She claims she doesn’t fear death because she has already faced a fate worse than death, namely bombing at a Long Island Jewish old folks home. Plus, its not like she was planning on using her womb anyway—one of the funniest recurring themes in all of Jackie’s shows is her strong dislike of small children.

While she isn’t above making jokes at her own expense, Jackie seems more confident than ever here. Perhaps the most shocking thing in the show is a moment of humble seriousness towards the end. Hoffman sincerely acknowledges the courage of women she met while in Mount Sinai hospital, who were in much worse shape than she was.

Acid humor that never gets all the way to self pity, a great character actress who—in spite of her raunchy jokes—looks more glamorous than ever; I don’t doubt that “Jackie with a Z” will be Jackie’s biggest solo hit yet!