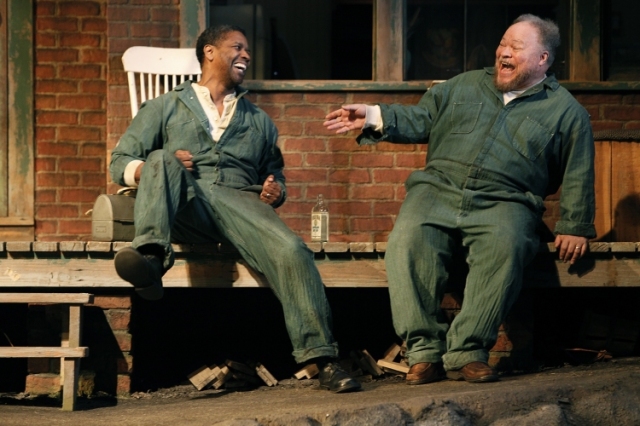 He’s already a master playwright with Fences, but one still strongly influenced by Arthur Miller and Eugene O’Neill. Troy Maxson, the central character in Fences, is a tyrannical American father very much in the mold of O’Neill’s James Tyrone (Long Day’s Journey into Night) or Miller’s Joe Keller (All My Sons). His personality is 100% Wilson, but his tragic trajectory has a familiar ring to it.

Maxson is haunted by the discrepancy between his past success in the Negro baseball leagues and his future, unpromising at best. Denzel Washington is magnificent as Troy, playing him as a man who never doubts himself — even when he probably should — a man who would rather be angry at the world and everybody who loves him, than ever admit he’s wrong or in pain. Viola Davis won a Tony for playing one of Wilson’s wronged, powerful women (Tonya in King Hedley II), and here she gives just as powerful a performance as Troy’s long-suffering wife Rose.

The character most redolent of Wilson’s later plays is Gabriel, Troy’s brother who was wounded in World War II. He was left with a substantial amount of shrapnel in his head. Gabriel’s wounds left him simpler than before, but also more in touch with the supernatural. This is a realm that grew in importance as Wilson continued to write, and Mykelti Williamson effectively magnifies this flavor, in a performance that successfully restores the mystery to Fences’s often grimly desperate world. Branford Marsalis pitch-perfect 1950s-style jazz and rhythm & blues score also give subtle, supple support.

Fences is by any measure a great American play, and director Kenny Leon has given it a suitably thoughtful and soulful production. Well worth seeing.