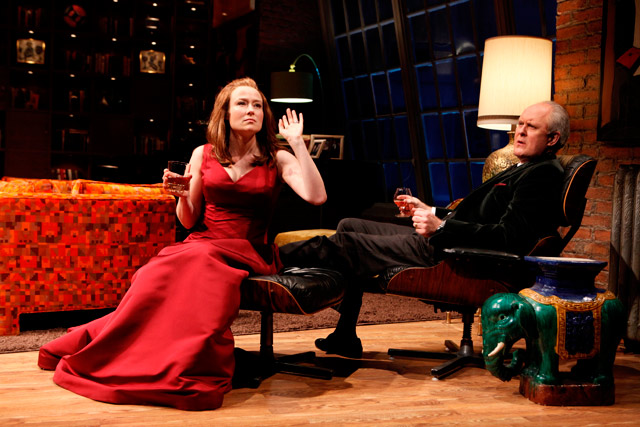 I like Douglas Carter Beane a lot, so I’ll try to be kind about Mr. & Mrs. Fitch, a comedy I really wanted to like, but couldn’t. Mostly, I have a lot of questions.

Right off the bat, I want to know: Douglas Carter Beane, do you talk like your two titular gossip columnists at home? Mr. Beane and I are neither that far from being Mr. (or Mrs.) Fitch — urbane New Yorkers reporting on pop culture, trying to find witty ways to respond to often witless stimuli. So I ask again: Douglas, do you talk like these overeducated name-droppers at home? Cuz, overeducated as I might be, I sure as hell don’t.

If Beane’s trying to create a cartoon version of an urbane couple fighting to bar the barbarians from the gate, well, it’s not cartoonish enough. In the very first scene, we feel that we’re in a realistically represented Manhattan apartment, and the too-clever banter rings awfully false. Does Beane mean for us to find them as hollow as they appear? And then expect us to give a damn what happens to them over the course of two acts?

There’s evidence that this wasn’t Beane’s plan. The only part of the play that truly held my attention was the final scene, in which the Fitches experience an epiphany, and find the courage of their convictions, both moral and artistic. The Fitches I glimpse in that final scene were people I wanted to get to know better. That they arrive at such an admirable point suggests that Beane wanted us in some way to identify with them. And because of those hollow first impressions, I never did.

Douglas Carter Beane, I know you are capable of creating characters that are vapid (Sonny in Xanadu) or perhaps even a bit evil (Hollywood agent Diane in Little Dog Laughed), whom the audience somehow still cares about and follow through your plots. My biggest question: How did you fail to do that here?