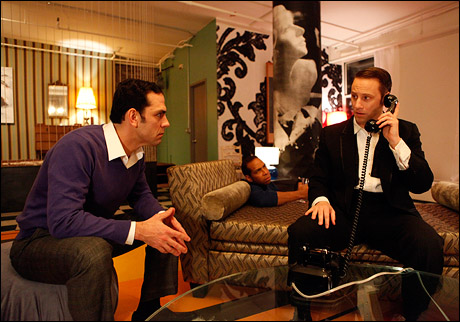 The Boys in the Band for a long time had an unfair reputation as being the worst kind of gay play: full of self-hating homos, representing a whole spectrum of stereotypes. It gained this reputation largely because it was among the first commercially successful gay-themed plays. It was the late sixties, and at the time the more forward-thinking gays in the theatre wanted the general audience to see self-possessed, healthy gay characters. The characters in The Boys in the Band may show flashes of self-possession, but they are neurotic (and alcoholic) as hell.

Now, after 40 years which have seen a wide variety of successful gay-themed American plays, The Boys plays a bit differently. It’s actually an intelligent, even penetrating, examination of internalized homophobia. Even that makes it sound less interesting than it actually is. Some smart theatre person once observed that Chekhov’s The Three Sisters isn’t about three moping women who never get to Moscow, it’s about three exciting, vibrant women fighting like hell to get there. Similarly, Boys is, at its root, about a group of exciting, vibrant men fighting like hell for self-respect and love.

Michael, a recovering alcoholic, hosts a birthday party for his friend Harold in his Upper East Side apartment, with six of their closest friends. The evening begins with this group of friends celebrating, singing and dancing — when left to their own devices these guys are happy. But when the world comes knocking in the form of Michael’s straight college friend Alan — or the form of dysfunctional toxicity between Michael and Harold that emerges when Michael falls off the wagon — staying happy seems like a steeper climb.

Director Jack Cummings III has staged the play in an actual penthouse loft, transformed into Michael’s 1960s apartment. The audience sits on all sides, creating an intimate, three-dimensional environment. This was a very effective choice; being that close to these men allows you to get a really strong read on precisely when the jokes are kind, and when they’re cruel. It’s a solid production that casts an insightful eye toward both gay history and plain old human psychology.