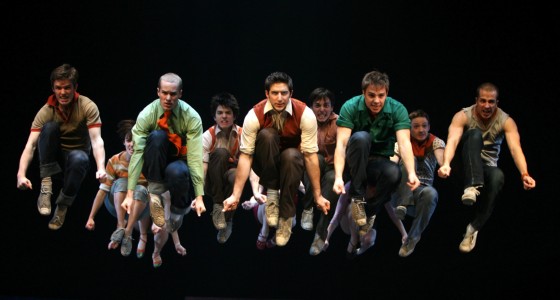 I’m biased here: I’m a complete Leonard Bernstein nut. I’ve been very excited ever since I first heard about the new Broadway revival of “West Side Story,” perhaps with a twinge of worry that director Arthur Laurents’s self-professed “radical vision” might somehow fuck it up. I thrilled to report that I’ve discovered this show is pretty impossible to fuck up—as long as you nail the sublime Bernstein score and the electrifying Jerome Robbins choreography. Nail it this company does, and the results are glorious.

Laurents vision isn’t so “radical” as all that—he’s essentially just taking the musical’s street gangs seriously and tweaking things slightly to show them for the thugs-in-training that they are. Set in mid-1950s Hell’s Kitchen, the musical explores the rivalry between the gringo Jets and the Puerto Rican Sharks, two teenage gangs.

Okay, Laurents does have one minor fuck-up: His much-discussed decision to have “In the Heights” creator Lin-Manuel Miranda translate chunks of the Sharks dialogue into Spanish. It doesn’t add as much as I think Laurents thinks it does, and causes a handful of plot moments to go missing for non-Spanish speakers. If this strategy brings in the Latino audience that have flocked to “In the Heights,” great, but otherwise it’s a bit of an artistic bust.

A former Jet, Tony, falls in love with Maria, the sister of Shark leader Bernardo—and this production has a marvelous Tony and Maria in  Matt Cavenaugh and Josefina Sacaglione. Also worthy of special note is Curtis Holbrook, who brings a strong sense of punkish menace to the usually lightweight “Gee, Officer Krupke.”

There are also stronger gay undercurrents in this production—it’s Baby John, the most effeminate Jet, and tomboy Anybody who dance first in the utopian “Somewhere Ballet.” Did they do this in original production? If they did, then what was once code is today more obvious (and the more moving for it)—“Somewhere there’s a place for us,” indeed.