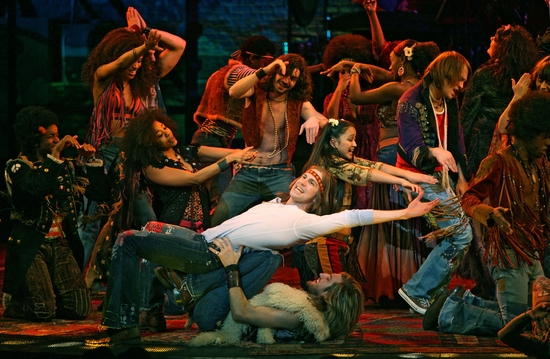 You could easily argue (and many people have) that without “Hair: The American Tribal Love-Rock Musical” we wouldn’t have “Rent” and “Spring Awakening” today. This overstates the case: While “Hair” did create a rock musical trend on Broadway in 1968, the two following musicals “Dude” and “Via Galactica,”  by the same creative team, killed that same trend by 1973. It started no continuous “tradition” of rock on Broadway. Still, “Hair” did prove, for the first time, that rock music could drive an artistically and commercially successful Broadway show, and that precedent is undeniably important.

The evening starts out as a loose collection of hippie-centric and anti-war songs (like “Aquarius” and “Donna”) and scenes. Slowly a story begins to emerge. Claude (Gavin Creel), an Anglophile from Long Island, has been drafted and struggles to decide whether to just accept it, or do what his tribe of hippie friends is doing and burn his draft card.

Director Diane Paulus has successfully captured the show’s energy and the raw passion of its anti-war sentiment, and amps up every bit of homoeroticism that’s there. Galt MacDermot’s score, one of the last on Broadway to birth several pop hits, is the most glorious thing about the show, and the young cast sings it with abandon. This “Hair” is undeniably colorful and vibrant.

And the show has only improved in the move from outside (Central Park) to inside (Broadway). The edginess and grit you can find on the original recording is much more in evidence now—indeed, the stakes seem higher across the board for these dirty, often angry, New York City kids. Creel replaced the Park’s Claude, Jonathan Groff, and for whatever reason, Creel is taking bigger risks, in both his singing and his acting. Those risks pay off big time, and what was simply moving in the Park is now truly devastating. Long may this “Hair” wave!