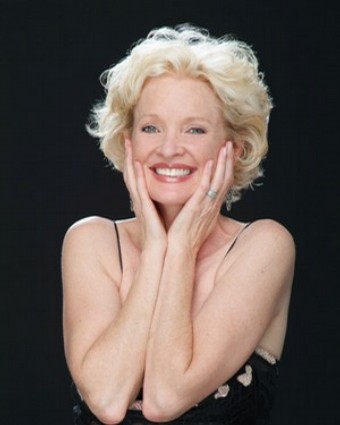 The club act that Christine Ebersole did in late 2001 at the much-missed cabaret Arci’s Place is the stuff of cabaret legend. It caused my husband Gacin to exclaim “She’s faaaabulous!” and me to write that she is “one of those talents that comes along just a handful of times every generation,” something she proved in spades in her Tony-winning run as Little Edie Beale in the Broadway musical “Grey Gardens.” We were thrilled to hear, then, that she would be reuniting with director Scott Wittman—who has his own Tony for co-writing the score of “Hairspray”, and who directed that magical Arci’s Place act—for a completely new cabaret show at the Café Carlyle. I sat down to talk with her about the new act, and her role in the upcoming Broadway revival of Noel Coward’s “Blithe Spirit.”

How long have you been working on the new act for the Carlyle?

[Laughs.] Not very long! I would say I got the call when I was out in L.A. doing an episode of “Samantha Who,” about December 10, something like that. So I got together with Scott Wittman We’ve been going over music and music and music, and we’ve finalized it, I guess last week. [Laughs.] It’s very fly by night, learn Guinevere in “Camelot” in three days—which I did early in my career—but this is different even than that because we’re assembling the whole show, the music, writing the patter, pulling everything together. And John Oddo is doing all the arrangements. I worked with John briefly with Jimmy Naughton. My agent put Jimmy and I together as a package, and John had worked with Jimmy for a long time. John was Rosemary Clooney’s musical director, you know, and worked with jazz legends like Woody Herman.

So you’ve had lots of rehearsal with John?

Um…I’ve met with him twice… [Laughs.] I don’t want to give the wrong impression because when you’re a musician that’s the way it works, that’s the nature of the beast. You know the nature of creativity and art; we know what the outlines of each song are: the keys and all that. On the other hand, it’s not my personal preference, coming from the theatre, I would like to have more rehearsal, but that’s the way this came. It was actually because of Eartha Kitt. We’re doing the show in what was going to be her spot in the Carlyle season. When she took ill, they called and asked if I could fill in, I think she was scheduled for five weeks, and I was able to do two of those weeks, but I couldn’t do any more because of “Blithe Spirit,” and even at that my second week at Carlyle is also my first week of rehearsal of “Blithe Spirit.” That’s really the way these things appear with me, that’s the way it works, welcome to my life! I guess I’ll find out if I can manage doing both. [Laughs.] I’ll find out.

The previous act you and Scott created was so great…

I love working with Scott because he has such a vast knowledge of music, and he knows what I can do—so there’s always a great array of songs to choose from. We bring the same sensibility to the table; I mean he’s been a friend for over 30 years. I think everyone should be pleased, I’m certainly thrilled with the material, it’s just spectacular—running through it are themes of love and family, the economy. [Laughs.] And what is everlasting.

Are you excited about “Blithe Spirit?”

Definitely, it’s very exciting. That’s brand new, too, because I’ve never worked with anybody in this amazing cast before. Jeffery Richards had approached me about doing a musical he was interested in producing and I said, “You know, after ‘Grey Gardens’ I really can’t top that, and I have to come in through another door. When I come back to Broadway, it’s gotta be in a play.” This doesn’t mean I won’t come back and do a musical, but just not on top of it. So he came back with “Blithe Spirit” and I thought that was a great idea. From there he went and assembled the rest of the team. Jeffery and I had worked together on “The Best Man” in 2000; I love him and it’s great working for him, we had such a great time. Do you believe that cast! Fantastic. Angela, Oh my God I’m looking forward to working with her. She’s always been an inspiration to me. My very first part I received on Broadway was in a play called “Angel Street” in which I played Nancy and that was Angela’s first film role. And I’ve done the title role in “Mame,” which she created. I always looked to her for hopes of career longevity.

You’ve done pretty well so far. Another day, another dollar…