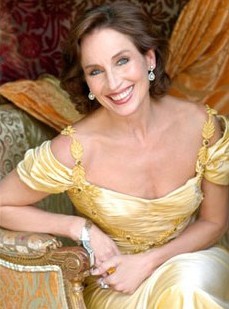 “Andrea Marcovicci Sings Rodgers & Hart,” opening on Tuesday, November 13 at Algonquin Hotel’s Oak Room, celebrates the music of one of the American Songbook’s most prolific and accomplished songwriting teams. Marcovicci will sing both the duos hits (“Manhattan,” “My Funny Valentine,” “Where or When,” “The Lady is a Tramp,” “This Can’t Be Love,” “It Never Entered My Mind”) and undiscovered gems. From the giddy excitement of Rodgers & Hart’s early collaborations to Hart’s heartbreaking untimely death, Andrea traces this singularly American story of a duo that gave us so many beloved songs.

Set along the sculpted lines of Richard Rodgers’ sumptuous melodies, a Lorenz Hart lyric is—according to Andrea—“an acting scene waiting to be brought to life. I was attracted to what Josh Logan”—the notoriously gay Broadway director—“called the ‘bitter beauty’ of Hart’s lyrics. No other lyricist brought so much of his own personal life—the elated highs and the manic-depressive lows—to his writing.”

Lorenz Hart, we now know, was a gay man who never quite came to terms with his sexuality. Does your show deal with that?

Absolutely. The show starts in a very light-hearted, congenial way. It’s  also in chronological order and begins in the early 1920s: all sorts of grand silliness and wonderful gaiety—no pun intended. As I tell the story of their work and delve deeper and deeper into Larry Hart’s personality, the story darkens and gets richer. I don’t bring the show back up to some kind of happy ending. I get more and more truthful as the show goes on, about Hart’s self-destructiveness and his very early and very untimely death.

Larry had, in his life, this Milton “Doc” Bender who provided him with men but also with excessive amounts of drugs and alcohol, which ended up being very destructive for him. I look at both sides of him: a gay man, but also a man who was drinking himself to death, destroying his life with destructive habits. You can’t say of Larry Hart “well if he could have come out he would have been happy.” He wasn’t just a closeted gay man; it’s far more complex than that.

How involved was Hart with the gay underworld of Manhattan of his day?

From my research, it seems that Larry Hart didn’t meet with much success in the gay world of his time. He went out with Doc Bender, he enjoyed being around all of the decadence that Bender could bring him. But when it came to his experience one-on-one with men, according to the only actual quote I could find from a man who spent the night with Larry Hart, Larry became frightened and spent most of the night crying. You would think that if Hart had made any kind of happy, successful connections in the gay world—as it’s clear Cole Porter did, for example—by now we’d have more quotes, more available details, more people who would have come out and said “yes, I was his lover.”

Instead, Doc Bender, who was very openly gay, took Larry on “tours” all over the place, took him away to Mexico. There will be things we’ll never know about what happened when they were out of the country. Larry was a severe alcoholic, and what happened on his long binges we’ll never know about. What we do know doesn’t paint a terribly happy picture, it’s clear that he was incapable of establishing an ongoing love relationship and that, very likely, is what destroyed him. If he could have loved and been loved in return, which he wanted so badly, he wouldn’t have died so young.

Did his declining health affect his lyric writing?

Larry Hart is the greatest writer of the unrequited love song. Unbelievably, even as his self-destructiveness plunged him into ever-deeper alcoholism, he was still able to sober up and write “By Jupiter” in 1942 and he wrote some of his finest lyrics at the very end of his life for a revival of “A Connecticut Yankee in King Arthur’s Court.” In the show I really try to understand how the creative Larry stood right at the side of the tortured Larry. At the very end of my show I raise the question of whether he might indeed have loved Richard Rodgers—was that really his great unrequited love? Very possible.

I have to hand it to Richard Rodgers that he put up with unbearable behavior on Larry’s part, he was for 20 years able to cope with it. I talk about that moment when “Oklahoma,” Rodgers’s first collaboration with Oscar Hammerstein, opened while Hart was still alive. There are a lot of people now with so much time gone by, that think Larry Hart dies and then “Oklahoma” is written. That’s not true: He went to the opening night of “Oklahoma” and died six months later.

It’s a very touching show, very funny at times—there isn’t anybody any wittier than Larry Hart. He speaks to me on a level that is just so profound. I don’t think anybody else ever wrote so much from the heart, their own feelings. When you look at the heart of one of his lyrics, they’re every bit as human and moving as anything Hammerstein wrote, just framed in a more sophisticated “New York” way. He’s always been my favorite lyricist: I‘ve wanted to do a show about him ever since I started doing cabaret in the 1980s. I’m so excited!