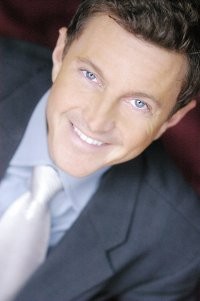 It’s a very sweet, romantic notion: Jeff Harnar, one of the most celebrated performers of the American Popular Songbook, has intentionally crafted a cabaret act in a style that he knows his boyfriend enjoys. “I’ve been with Keith for around two years now,” smiles Harnar, “and I have never seen so much cabaret in my life! I mean I’ve played almost every venue on the New York nightclub scene, the Algonquin Hotel’s Oak Room, the Firebird Café, many others. But I never saw nearly as many shows as I do with Keith.

“Keith just loves to go,” Jeff enthuses, “and what he loves particularly are the kinds of shows that feel like a party. The kind of shows that Eartha Kitt and Elaine Stritch do and the late great Bobby Short used to do. That’s what I’ve tried to conjure with this show, and what better songs to create a party atmosphere than the songs of Cy Coleman, so jazzy and colorful. I also do other things to evoke that party spirit: You know how Eartha Kitt zeroes in on certain audience members, talks to just them (to the point where it’s amusingly uncomfortable) I do a little of that early in the show.”

When asked what causes the enduring appeal of cabaret and the American Songbook to gay men, Harnar doesn’t hesitate: “I think it’s the intensity of feeling. I mean when I grew up it certainly wasn’t allowed to express the feelings that I was having for other men; I for one gay man responded profoundly to the strong emotions that are so eloquently and vividly expressed in American standards. It’s the same thing that explains the enduring popularity of such expressive stars as Bette Davis. I mean, not all gay men might repress their feelings in that way, but every one has known at some time or other that that was expected of them. Maybe the best way to put it is that we have a heightened sensitivity to that kind of intensity of emotion.

His new show, “A Collective Cy: Jeff Harnar Sings Cy Coleman,” will celebrate the Tony Award-winning Broadway composer, featuring famous songs from his shows like “Sweet Charity,” “City of Angels” and “Seesaw,” plus standards such as “Witchcraft” and “The Best Is Yet To Come.” “It’s an emotional show for me,” admits Harnar. “It doesn’t escape me that Cy had played the room at Feinstein’s only a year earlier, before his untimely passing. I mention it in the show—how could I not. I just wish he was here to hear me sing his songs.”

Harnar wanted to be sure that I noted that while his show is “every bit as glamorous” as other shows you’ll see at Feinstein’s—proclaimed “Best of New York” by New York Magazine and a “throwback to the classic era of supper club entertainment” by Time Out New York—it’s only a $40 cover with a two-drink minimum, which is considerably lower than their usual prices. He says, “People should get a taste of how much fun this place is, and with my show they can do it without breaking the bank.” Sounds like a party to me!